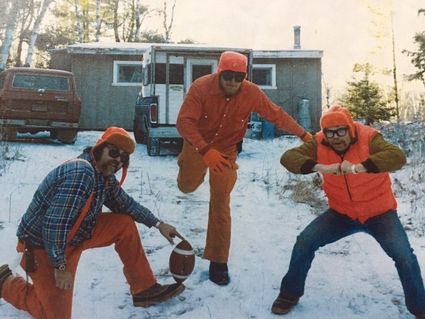 Steve Korby, right, and friends Tom Montgomery and Steve Boss would go deer hunting in the 1970s and a football game would break out.

Deer hunting season starts tomorrow, but the signs have been there for weeks. Behind shoppers' masks at the Super One grocery store, I've noticed more patrons (men, I think) sprouting beard growth and buying a lot of meat. It has been a cold October. Already in northeastern Minnesota, there has been snow staying on the ground for a few weeks. Now a warmup is upon us for opening day.

The annual deer harvest ritual -some call it a Minnesota state holiday or vacation - runs Nov. 7-22 for most areas around Carlton County - two full weeks and three weekends.

My dad's family, a big happy bunch, were all outdoorsy and most were deer hunters. My mom didn't hunt, but she was a crucial element in the planning process. It was the one time a year the red insulated food bag was put into service. She'd make homemade bread and about a dozen sandwiches for the occasion. Dad's hunting party could have survived for days with the food that was packed.

Funny, I don't think any of these hunters were big fans of venison, but it was a needed food source when they were growing up.

Hot coffee in thermoses was another critical component of hunting success. I was a little kid but I usually woke up to the smell of coffee brewing and all the commotion in the house prior to daybreak. We'd wish the hunters good luck, send them off and I, at least, would go back to bed under my warm quilt.

My older brothers hunted with Dad. By the time I was of hunting age he had health issues and had given it up. I appreciated ruffed grouse hunting, and fall is my favorite time of year. There is nothing better than the smell of the evergreens and fallen brown and golden leaves, the warm sun on your face, and chasing those wily grouse through the thicket.

The ruffed grouse/partridge species have been on up-and-down population cycles, but I was never a reason for any downturn. When the birds flush, I usually have to change my underwear, so I never have hit one flying even with my double barrel shotgun. My hunting friends would like to tell you that the partridges I've shot over the years on the ground or in trees were drunk from eating mountain ash berries, wounded, had their legs frozen in an icy mud puddle, or didn't even have legs.

The most I've shot was three in a day and four total in a full season. The birds are quite safe from me.

Most of my friends deer hunted. I have never owned a deer rifle. I like to see and watch and stalk deer but never had the urge to shoot them. Seeing "Bambi" at the Chief Theatre must have had an impact on me as a child. But I wanted to go deer hunting and be with my friends, so I decided to take up archery and bowhunting so I could join them.

According to Floodwood legend, Uncle Bill Korby (also the Gambles store operator there) shot a big doe from about 100 yards away with an old long bow. He was on Rocky Teller's television show in Duluth, describing how he got the doe. Teller owned a sporting goods store in West Duluth, was a camping outfitter, and had a weekly outdoor segment on WDSM in the 1960s.

My uncle was a good shot. He won a Minnesota State Archery senior championship in the late 1960s. I also have a cousin who owned Korby's Rink 'n' Range - a roller rink and shooting range combined - in Willow River who won the Minnesota State Archery masters championship several times. I thought it happened only in the movies, but I actually saw my cousin split an arrow that was lodged in the bullseye of a target.

Anyway, I purchased a compound bow from Loyden's that was on sale, some arrows and hunting tips, a quiver, a range finder and sights. After many hours and weeks of practice, I went to my brother's land in Wrenshall after work one day to try my luck hunting. Shooting a deer with a bow and arrow seemed more like sport to me and I thought I could handle it.

During archery season, there wasn't much time after work before sundown. I walked to the end of the property, climbed a tree and waited. I clipped my quiver on a branch. Soon, on the opposite side of the field, two does emerged. Then I heard a buck snorting. I never saw it, but it certainly got my attention. The hair stood up on the back of my neck.

After waiting for a while, but probably only minutes, I decided the deer weren't going to come to my side of the field and if I wanted to get a shot, I had to go to them. As quietly as possible and with no quick movements, I descended from the tree. I elected to leave the quiver in the tree for fear of the clip being noisy and also thinking if I got one shot off I'd be lucky.

I got onto my belly and crawled on the grass for about 75 yards. The two deer were both eating with their heads down. One was quite a bit larger than the other. I determined that I was as close as I could get to the deer before I'd spook them. I put the rangefinder on the brown carcass, stood, and took aim.

The biggest deer was now broadside to me. I thought this was an easy shot. I couldn't miss. The arrow went inches under the doe's belly. The deer didn't move. I looked back in the tree where my quiver was and just sighed.

This was many years ago, but it remains indelible in my mind. Reflecting on my way home that night, I wondered how I would have tracked the deer into the night if it hadn't dropped right there, and how would I have brought it home if it had? They were questions I probably should have had the answers to before I let the arrow fly. It was the only shot I've taken at a deer with my Browning bow.

I did go deer hunting with my buddies during rifle season for a few more years, just carrying my bow along. I loved being outside, tramping through the woods, going to Monk's hunting shack in subfreezing temperatures, and all the other activities.

We weren't super-serious hunters. We'd go to the shack on Friday night, hunt fairly hard on Saturday, and then go have a steak at the Pequaywan Lake Resort Saturday night. We'd wake up Sunday morning (it was hard to give up the warm sleeping bag) and be back at the shack at noon for lunch and the Vikings - when games mattered during the Super Bowl years. Four of us would gather around a 6-inch black-and-white television that ran on batteries and had rabbit ear antennas. After a usual Vikings victory, we'd go outside and play tackle football or two-on-two basketball with an 8-foot basket, a ball that didn't bounce and no rules.

We had great fun, bandaged our injuries, and then headed home.

The memories and traditions from deer hunting are irreplaceable. I get it and understand deer fever. Some hunters my age now go with their grandkids and other younger relatives to keep the annual traditions going.

As for me, I think I'll roll over and cuddle with my wife under my warm quilt.

Steve Korby loves local history and sports. If you have a story suggestion for him, email [email protected]