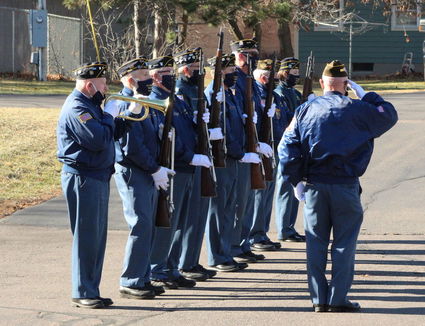 Members of the Cloquet Combined Honor Guard stand at attention during a local funeral while "Taps" is played to honor the deceased veteran.

For members of the Cloquet Combined Honor Guard, every day is a veteran's day.

On Tuesday, they honored veteran Richard Allen Kedrowski, a veteran of the Army, Air Force and Minnesota Air National Guard who died at the age of 77 on Oct. 28. He had a "colorful" military career, his son said, pointing out during the service that his dad was stationed in Germany when the Berlin Wall went up in 1961, and again when it came down in 1989.

While the family remembered their husband, father and friend with stories and scripture, members of the Honor Guard were there both to honor a veteran who passed on, and to help bring the family some closure.

Wearing fitted blue uniforms with caps and embroidered face masks, the Honor Guard members began the funeral by saluting and observing a moment of silence in front of a photo of Kedrowski with a folder flag underneath, then concluded the service with a 21-gun salute outside the funeral home.

Their role in Kedrowski's final rites was complete when Capt. John Prouty presented Kedrowski's widow with three spent bullet casings and his condolences.

Like other honor guard groups across the country, these volunteer veterans are ready and willing to provide honors at a veteran's funeral, something they may do multiple times a week. In September they provided services at 18 funerals, in October it was 10. "It varies," Prouty said, adding that they were headed to the new Minnesota State Veterans Cemetery in Duluth Friday afternoon.

Although they are all very formal and serious during a funeral service, the honor guard members do a lot of kidding around during an interview, along with poking fun at each other.

When Prouty is asked how long he's been in the honor guard, Rich Ekholm cuts in: "Since Lincoln was president," he cracked.

When asked why he joined, Army veteran Stan Lamb of Culver said he knew they needed some younger members after the new veterans cemetery opened up.

"All the other people were old and dying," Lamb said. "We're just old."

On a more serious note, Air Force and Air National Guard veteran Tim Carroll said he likes to think of it as "paying it forward." Carroll joined after one of his best friends, Todd Mackey, passed away. He said he just felt like it was something he should do.

"It all comes back to honor and respect for the veterans and veterans' families," Rich Ekholm said. "We are all honored and privileged to do this."

Although their funeral services make up the majority of the guard engagements, they do much more than that. The Cloquet Combined Honor Guard usually leads the local parades, bearing flags for each branch of service. They also travel to multiple cemeteries on Memorial Day - playing taps and rendering a gun salute at each stop - and visit with students for events such as Flag Day, or the school patrol pizza party each year, one of their favorites in non-pandemic times.

Prouty said the honor guard has 23 members on the roster, including one veteran in his 90s. It includes veterans from Cloquet's VFW Post, American Legion and Disabled American Vets group. There is a captain representing each veterans organization: Richard Chasse for the VFW, Jim Dennie for the Legion and Prouty for the DAV. There are about 15 regular members, but they could use more.

Dennie said Chasse recruited him - the Korean-era vet recruited many of the members over his 12 years in the Guard - and Dennie said he would join, if Chasse would join a retired group to which Dennie belonged.

Gabrielle Kenwood is the newest member of the local Honor Guard, and the only woman in the Cloquet group (the Fond du Lac Honor Guard has more than one woman, but that's another story). Kenwood shared how much it means to her to be a part of the Honor Guard. 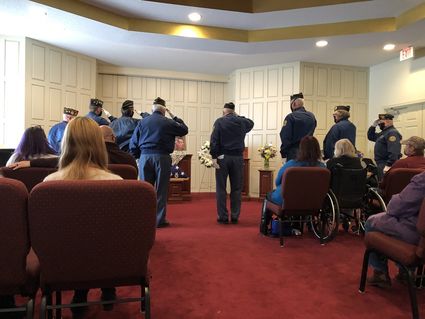 "I joined the service because I wanted to serve my whole life and help others, and then I was injured and medically retired. I lost my mom, who was also in the service, and I kind of lost myself for a bit. And then I found them. This is better than me even joining the Army, I think. I get to do this for them, for the families. It's the best thing ever. I can still serve, even though I can't do other parts of my job."

Ekholm said something along the same lines: "It gives you a good feeling, doing something for someone. And every once in a while, the hairs on your neck stand up," he said. "I told my wife I won't quit doing this until they put me under. It's one of the big things in my life now."

There are several other honor guard groups in Carlton County, including the Carlton Honor Guard, the Fond du Lac Honor Guard and the Moose Lake Honor Guard.

Prouty said the group keeps going strong, despite the pandemic. They will help out other honor guards too, when it's needed. "We will cover the whole area, wherever we're needed," Prouty said.

How does a veteran get into the honor guard?