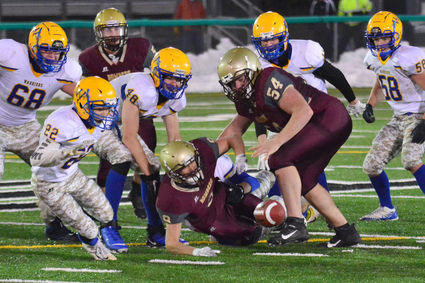 Barnum's Willie Richardson, on ground, and Sean Nyblom scramble to recover a fumble during the second half against Deer River. Find more photos below.

Barnum was looking for its second win of the season against a good Deer River team for its homecoming celebration Friday, and it looked like they might get it. After the first half, the Bombers held a two-score lead. Then the Warriors bounced back with three unanswered touchdowns in the second and shut down the Bomber offense to escape with a 36-28 win.

Barnum's Max Moors scored on a 1-yard touchdown run in the first quarter, which was followed by a Reed Kornovich 2-point conversion. The Warriors reacted with a15-yard pass from Blake Fox to Rhett Mundt. The conversion run failed, leaving Ba...