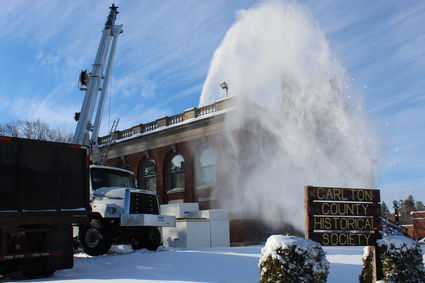 A snowblower shoots a plume of snow off the roof of the former Shaw Library, home of the Carlton County Historical Society, on Wednesday morning. Commercial Roofing of Barnum is preparing to put a new roof on the 100-year-old building, and CCHS has been fundraising to help pay for it.

A generous and anonymous benefactor is offering a dollar- for-dollar match for any donations to the Carlton County Historical Society roof fund.

The match is good for donations up to $10,000 from Nov. 13 through Dec. 4, an ecstatic CCHS executive director ElizaBeth Lyle said Wednesday morning.

CCHS has been fundraising for months to cover the costs of a much-needed new roof for the century old Shaw Memorial Library, longtime home to CCHS. The unusual weather patterns - snow in October and driving rainstorms followed by snow in November - caused some delays to the project, which was due to begin this week. It needs to happen before winter truly sets in, Lyle said, because it's been leaking into the building and could damage some of the exhibits and historical artifacts.

The estimated cost of the roof replacement is $60,000, with work to be done by Commercial Roofing Inc. of Barnum. So far the historical society has raised at least half of that money, but they hope to pay for it all through donations.

"We're in our final fundraising push," CCHS board president Ed Kavanaugh said. "Every dollar makes a difference. To have this generous match is amazing. We encourage our community to take advantage of literally doubling the value of their donations."