History mystery not quite resolved 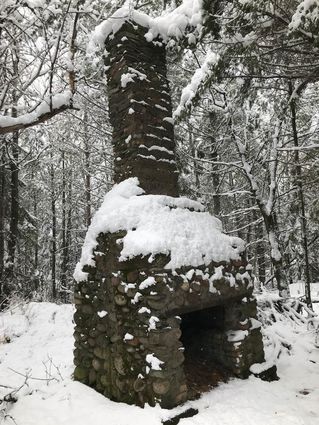 There’s good news and no news regarding the two History Mystery photos from last week. David Haugen submitted pictures of a fireplace sitting alone in a woods in Cloquet and a “gondola

cable car” along the St. Louis River near Scanlon.

There is nothing to report on the cable car, yet, but we’re working on it.

There is plenty to report on the fireplace. Cloquet’s Julie Johanson provided a clue that unlocked a lot of history about the structure found in a slice of woods east of the playground area at Hilltop Park. Her mother was a Whitman, she told us, and the Hilltop Park area was once the Whitman Farm. She recalled playing in the woods and the fireplace.

Using the Whitman name, we did a search with “Hilltop Park” and up popped the 2012 obituary for Albena Buczynski. Bena was 99 years old when she died and the words describing her life were a gold mine of information.

She was one of the oldest living survivors of the 1918 Fires. She was 5 when the fire hit the Sobolewski homestead in the Kettle River area. Two families sought shelter in a dry well, 14 people in all, and all survived.

When Joe died in 1974, some of the land went to Knife Falls Township for a park. It was called JoeBena Park and Buczynski Park before becoming today’s Hilltop Park, when Knife Falls was annexed into the city of Cloquet.

We asked the city about the fireplace, but no one knew much. It’s likely the woods east of the playground are not part of city property. Farther east of the fireplace is the massive gravel pit.

Bena and Joe had a son, John, who is in his 80s and living in Superior. We came across a story about John and artwork he has done over the years. The story said he was known as “Mr. Woods” in Cloquet because he was always exploring the wilds around him.

The road off 14th Street, on the south border Hilltop Park, is named John Road after the oldest Buczynski child.

We got in touch with John and he laughed about the “Mr. Woods” reference. And he definitely remembers what is now just a fireplace and chimney in the woods.

The 1958 graduate of Cloquet High School said the fireplace was once inside a one-room cabin that had a wood floor. It was nothing fancy, he said. He thinks it may have been built by hand.

The old cabin had a big main door and it served as a bad weather shelter for him and others who tramped in the woods as kids in the late 1940s and 1950s.

John said he’s surprised that anything is left of the structure.

There is some conjecture about the old cabin. Was it a temporary home for someone after the 1918 fire? Was it just a machine shed? A hunting shack?

Being that it was pretty run down by 1950, John says it could easily date back 100 years or so.

So some mystery remains around the fireplace, but not nearly as much as before. Thanks to Julie and John for the help in unlocking part of the history. 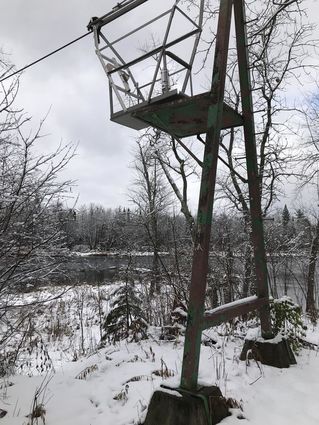 As for that gondola car, we’ll keep plugging away on its story.

We appreciate direct contacts about items by email at [email protected] or by calling Pine Knot News reporter Mike Creger at 218-216-6292.

And if you have your own History Mystery to solve, please pass it along. Pictures are not necessary. Any ideas about enigmas to solve are welcome.