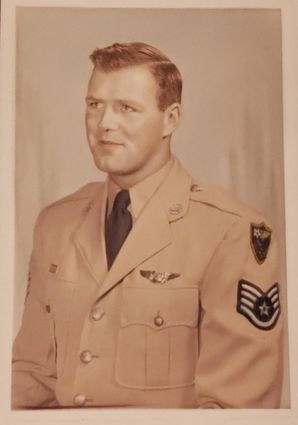 He attended school in Peterson for nine years and then transferred to Rushford for the remaining years. He and his brother Jack joined the U.S. Air Force in 1952. Llewallen married Suzanne J. Wicklund on May 2, 1959, in Duluth.

He spent 20 years in the Air Force, serving in both the Korean and Vietnam wars, and retired as a master sergeant. He was exceptionally proud of his military service and talked of it often.

After retiring, he spent several years working in the field of refrigeration. He frequently travelled around Minnesota, North Dakota and Michigan installing refrigeration units in grocery stores. His childhood consisted of farming, riding horses, and hunting and fishing with his brothers. Later in life, he also loved spending time canoeing in the Boundary Water Canoe Area Wilderness, growing tomatoes, painting, and coin collecting. He loved having all his family around for big barbeques, watching sports and having snacks.

Llewallen was preceded in death by his wife, Suzanne, daughter Kathy Landsverk, and brother Tilford Landsverk.

Private family services will be held. Burial will be in Sunrise Memorial Park in Hermantown.

Letters and cards of condolence may be sent to the family in care of Atkins Northland Funeral Home, 801 14th St., Cloquet MN 55720. A videorecording of the funeral is on the funeral home's website. To sign the guestbook and offer an online tribute, see http://www.atkinsnorthlandfuneralhome.com.