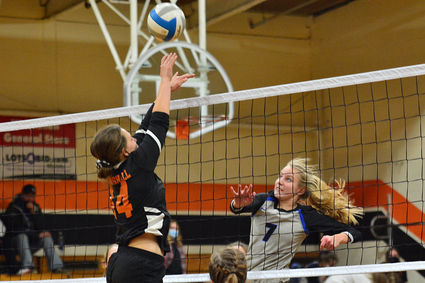 "Scrappy" couldn't quite overcome "tall and athletic" on Monday, but the Wrenshall volleyball team competed hard against it in Monday's home match against South Ridge.

It's been a good season for the Panthers (now 7-1) said head coach Brad Olesiak, explaining that they graduated four seniors last year but welcomed members of an undefeated junior varsity squad into the varsity ranks this season.

"I thought they would fit in perfectly with what we had coming back and they have gelled very well," Olesiak said.

He praised the performance of his two senior hitters, Camryn Olsen and Raina Schneider, against Wrenshall, admitting that this year's team has a lot of height, which is nice. "I thought we played one of our all-around better games of the year," he said. "We had one starter out, but our new girl did very well."

Olesiak said he lined up his best blockers opposite Wrenshall's two top hitters, which helped as well.

"Wrenshall played well, they're scrappy," he said. "They're a solid team and they don't give up. I'm surprised they don't have a better record."

The loss brought the Wrens to two wins and six losses.

Wrens head coach John Peterson said his team struggled with communication Monday, but showed flashes of brilliance. Senior middle hitter Brooke Kent had a couple of really great hits as well as blocks, and did well with her serving too.

"She's my strongest player overall and the best athlete on the team," Peterson said. He also praised his other middle hitter, sophomore Janae Sjodin, who also had a couple of great hits and blocks Monday.

"She is adjusting to a new position but she's been doing great," Peterson said. "The whole team is getting better constantly."

Both teams have had games canceled or rescheduled: the Wrens three times - counting this Thursday's game against Floodwood - and the Panthers twice. They do their best to reschedule or find another game in an already shortened season, the coaches said. After Floodwood canceled, Peterson set up a match with Nevis, nearly three hours away. Instead of playing Cherry earlier this year, Olesiak picked up a game against Moose Lake. The Panthers are set to play Esko in their last regular season game after a postponement due to Covid exposures.

Pandemic permitting, local volleyball teams have two weeks left of their shortened season, followed by playoffs if it happens. Both coaches say they and their players are grateful for every game as Covid-19 numbers continue to climb in the Northland. 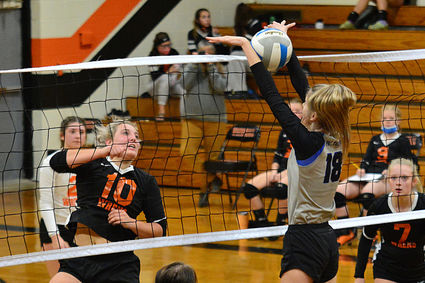 South Ridge senior Camryn Olsen tries to block a shot from Wrenshall's Brooke Kent during Monday night's game between the Panthers and the Wrens.

"I'm 100-percent glad we had a season, even with the challenges," Peterson said of his small but tight knit team. "They need that touch of normalcy, physical activity and socialization - it's all needed."

Still, it's been challenging.

"They've been having a hard time keeping up their spirits during the games without many fans there. They get down on themselves a little quicker than normal," Peterson said, explaining that each player is allowed to have two family members in the gym, and zero classmates are allowed.

So far, knock on wood, the teams themselves have remained healthy. But Covid is nipping at their heels, Olesiak said. He's hoping they can finish the season.

"I'm very pleased with the girls, they're wonderful, they work hard and get along very well," he said. "It's been very enjoyable, and stressful - waiting for the call that we're not playing or done - but our goal is to take it one day at a time and keep going."