The Ticker: A quick look at area teams in action 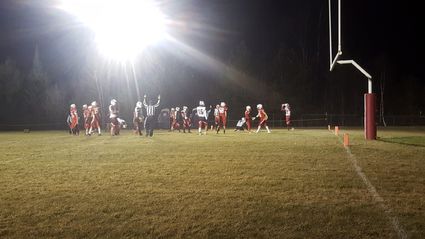 Ethan Shelton and Jaegar Goranson both scored a pair of touchdowns as the Cards rebounded from last week's loss to Ogilvie. Shelton led the Cards with 118 yards rushing and Goranson was right behind with 112 yards on the ground. Goranson also added a 6-for-12 passing game good for another 122 yards. Shelton caught three passes for 62 yards and Emmett Clark caught three passes for 60 yards. Clark scored the other touchdown for the Cards on a 20-yard touchdown strike from Goranson. The Cards are now 3-2 on the season after losing back-to-back games to Bigfork and Ogilvie in the previous two weeks.

The Eskomos fell to 2-3 on the season and picked up their second straight loss of the season. All three of Esko's losses have been at home and its two victories have been on the road.

The Raptors faced the tough task of playing the undefeated Lions on the road in Ogilvie. The loss drops the Raptors record to 2-2 on the season.

In other Carlton County prep football news, Barnum did not play this week and Moose Lake/Willow River will not play again this season as the team canceled its remaining games due to Covid-19 quarantine requirements.

As of Wednesday, when the Pine Knot News went to press, other Carlton County schools were still planning to finish the season, but that could change.