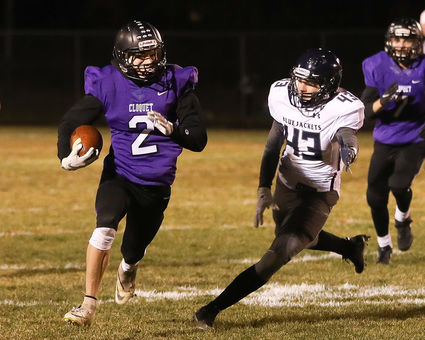 Cloquet's Alex Petersen carries the ball in the Hibbing game earlier this fall. He had a 92-yard kickoff return for a touchdown against Duluth East last week.

The Cloquet football team couldn't quite overcome a rough start last Wednesday night as they fell on the road to Duluth East 27-22.

"They are pretty big up front and we were caught out of position a number of times in the first half. In some cases it was a scheme thing, where they caught us in a bad defense for what they were doing," said Cloquet coach Tom Lenarz. "The combination of all those things produced some big numbers for them in the first half. We were able to tighten things up a little after halftime."

After giving up three touchdowns and a safety through the early part of the third quarter and trailing 20-0, the Lumberjacks fought back and tried to pull the momentum away from the Greyhounds and onto their side of the field.

"It's tougher mentally than physically," said Lenarz about trying to come back from a large deficit. "High school sports are all about momentum. When you have a young team, that gets magnified. I was very proud of this group and the way they played in the second half."

Cloquet's attempted comeback started when quarterback Alec Turnbull hooked up with junior fullback Marshall Hayes for a 7-yard touchdown pass and catch, but the conversion pass fell incomplete, leaving the Lumberjacks trailing 20-6. East answered with a score of its own and the extra point kick pushed its lead to 27-6 early in the fourth quarter.

"This was an area of focus for us after the Grand Rapids game," Lenarz said. "Dwight Lundeen is the long-time coach at Becker. I heard a quote of his over the week and shared it with our kids. He was talking to his team about a 21-7 loss to Hutchinson this year. He said, 'That was a great game. You guys got better tonight. Our team got better tonight.' That's a lesson we all need to hang onto at times. There are powerful lessons to be learned about continuing to compete in a game where the score isn't going in your favor. Against Grand Rapids, we didn't do that. Against East, we did."

Following the East score, the Lumberjacks reacted in kind when Alex Petersen returned the ensuing kickoff 92 yards for a touchdown, cutting the East lead to 27-14 after a two-point conversion run by Jack Sorenson. Cloquet narrowed the gap further when Hayes smashed into the end zone from the 7-yard line and Sorenson added the conversion run to make it 27-22, but it proved to be just a little too late.

"Jack Sorenson has played well for us for sure this year," Lenarz said. "He has played linebacker for us and has moved around a lot. I just love his attitude on the field and he is a smart kid. You don't always get a middle linebacker that is also an honor student in school. He does some really good things for us on game night and in practice."

Hayes led Cloquet in rushing with 77 yards on 20 carries and Will Turnbull led the Cloquet defense with six solo tackles and five assisted tackles.

The Lumberjacks were scheduled to open the playoffs at 6 p.m. Thursday night in Proctor against North Branch, a team they defeated in the first game of the season.