Cardinals can't keep up in final game of season 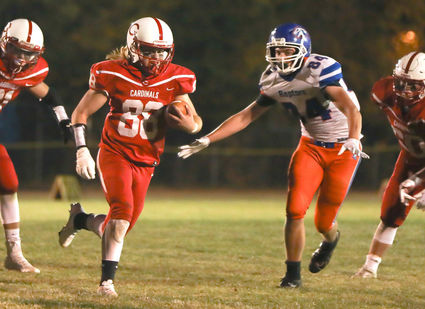 Jaeger Goranson, shown here in action earlier in the season, scored the Cardinal's lone touchdown against Hill City/Northland. It was the last game for both teams as sports in the state were suspended Saturday.

Entering their Wednesday game vs. Hill City/Northland, Cromwell-Wright Area knew the game would be their final game of the football season as sports .

When the dust cleared on perhaps the craziest season in Minnesota history, the Storm had won 28-6 behind some big plays by their offense.

"The game came down to the fact that we gave up two big runs," said Cardinals coach Jeff Gronner. "They scored on a 95-yard run and on a 60-yarder."

Cromwell-Wright trailed 12-0 after one quarter and 18-6 at halftime. The lone Cardinals touchdown came in the second quarter on a run by Jaeger Goranson.

"That is what the score stayed until we threw a pick-six with 20 seconds left in the game," said Gronner. "Both of our opening drives of each half ended inside their 10 without scoring; that also hurt."

Upfront, the Storm was a physical group that seemed to give the Cardinals problems at times.

"Overall, they were just more physical up front on both sides of the ball, and that made it hard for us to get off the field on defense and sustain much on offense," Gronner said.

For the game, the Cards ran for 177 yards and were led in the rushing department by Ethan Shelton with 63 yards, Goranson with 55 yards and Zevvus Smith, who had 53 yards. Cromwell-Wright also added 70 passing yards in the game.

The Cardinals wrap up the season with a 4-3 record.

"In a very unique year, our team was very fortunate to compete in seven games," said Gronner. "Back in the summer, I was hoping the high school league would give the schools a chance to decide if they wanted to compete in games or not, and I was hoping to get our seniors at least four games. Being able to play seven games in this crazy year was a blessing for our players. There were lots of ups and downs, but this team, along with many others in the state, learned how to be resilient and how to compete when things are not seeming to go your way."