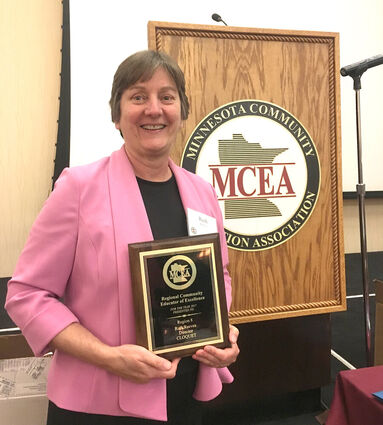 Ruth Reeves was recognized for her work with Cloquet Community Ed by the Minnesota Community Education Association.

When Cloquet Community Ed director Ruth Reeves pictured retiring this year, in her mind she saw herself enjoying each activity one last time.

"Each last whatever, I told myself I would really really take the time and enjoy it," Reeves said. "And then we just started canceling things in March. And we kept canceling things."

She had planned to step down at the end of the fiscal year in June, but it was just too "weird" she said. So she figured maybe things would be better in December. "Of course, right now we're in the thick of it," she added.

Reeves worked her last day on Thursday, Dec. 17, in an office and a building (Cloquet Middle School) that are strangely silent, thanks to distance learning and other precautions to prevent the spread of Covid-19.

She leaves behind a department that is adapting on an ongoing basis to the threats posed by the pandemic, while still trying to fulfill its mission of connecting school and community.

Meeting that mission can look different for each community education department, but in Cloquet, Community Ed touches the lives of residents from the time they are toddlers until they are seniors.

The youngest learners and their parents can meet in Time for Tots or the Early Childhood and Family Education (ECFE) classes, which give children time to learn through play while parents also learn about the joys and challenges of raising children. Community Ed runs two licensed childcare facilities - Li'l Lumberjacks at the high school and Li'l Thunder at the community college - plus they offer Kids Corner school-aged care at Churchill Elementary and Zion Lutheran Church along with special programming in the elementary and middle schools.

"Those are shorter, more specific classes for kids," she said, citing examples of Lego robotics or Savannah's pottery. "The idea is, if you're interested in that specific thing, then you can sign up. It has a very specific task for the day." They try to keep costs low, she said.

Community Ed is also the primary source for driver's education classes and training in Carlton County, something that couldn't be canceled because of the pandemic. Classes moved online and driving instructors (and students) wear masks for driving lessons.

"We do a lot for youth," Reeves said. "And the state likes to see that. I think they want at least 75 percent of your programming to be youth-focused."

But there are also many classes and programs for adults as well, at least during non-pandemic times. The ballroom dancing classes are very popular, as are the exercise classes such as yoga, PiYo and the very popular community boot camp. Community members can teach or enroll in art classes or finance classes, learn new skills or take a bus trip to someplace fun, like a river paddle boat or a Minnesota Twins game.

People of all ages can sign up for swimming lessons or lifeguard classes run by the Community Ed department, which has its offices in the same end of the CMS building as the pool. There are lap swims, senior swims, family swims and very popular aquatic exercise classes for seniors. Community Ed also partners with the city of Cloquet to run The Beach every summer.

They also run an assortment of programming for adults with disabilities. Before Covid, that program offered two activities a week, anything from a cooking class to the annual Valentine's Day dance.

That was one of the most difficult areas when it came to Covid cutbacks, Reeves said, especially for clients who live independently versus a group home.

"It was very difficult for them when we started shutting down group activities, because that was their life. We had one woman who was crying, she kept saying 'What am I gonna do?'"

So they've kept something going throughout, even if it was just meeting outside for a walk with everyone in masks because that socialization is so important to that population.

"That's when you realize how ingrained and important some of these things are to people," she said.

When the most recent state shutdown order came, Community Ed closed down everything except child care programs and a curbside pickup for craft kits for adults with disabilities. Reeves was looking forward to restarting the small, Covid-friendly things like private swim lessons and lap swims.

In normal times, however, almost all of the Community Ed programming here is thriving.

"Part of it is our draw," said Reeves, who moved to Cloquet after being the Community Ed director in Aitkin for 14 years. "Aitkin kind of sits by itself; people might have to drive 30 miles from Brainerd to take a class, which is a little far. But here we definitely draw from Esko, Carlton, Barnum - the whole county might bring kids to swim lessons or to take a class that's not available in their community. Our market area is larger than the school district, so it creates larger programming."

It's been a wonderful job, and a fabulous way to get to know and get immersed in the community, said Reeves, who was hired in 2012 when Sara Liimatainen retired.

"It's been a journey and I feel like a very lucky woman," she said. "We moved over here and I met hundreds of new people that I would not have met. This is a great job for meeting people, and getting a good perspective on the community."

Bill Bauer was on the hiring committee of the Community Ed advisory board as a high school student then, and said Reeves has been a great director, "with a very practical, no-nonsense leadership style." Since then he's worked with her as a college intern in the Age to age program and on the school district IT team. 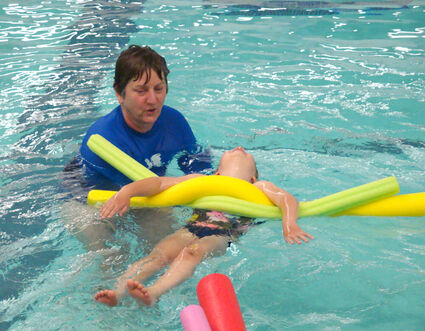 Ruth Reeves works with a young swimmer during a class at the pool. Swimming lessons and running The Beach in the summer both fall under the purview of Cloquet Community Education.

"She brought a lot of experience and strong direction and helped grow our Community Ed program," Bauer said. "She's had a big impact in not so many years."

But Reeves is ready to go. She and her husband will have more time for hiking and birdwatching and exploring the spectacular natural offerings in northern Minnesota.

"I still feel like I've got a lot left in me. I'll look around, and see what looks interesting," Reeves said. "Who knows what's next? I didn't know what Community Ed was when we moved up here, so you never know what's around the next corner."

Cloquet Community Ed is in a good place for a new leader as well, she said. In many ways, now that things have slowed down or been canceled outright, it's a good time for someone to come into the eight-person school district department and learn how things have been done, share their ideas and create their own version of Community Education in Cloquet.