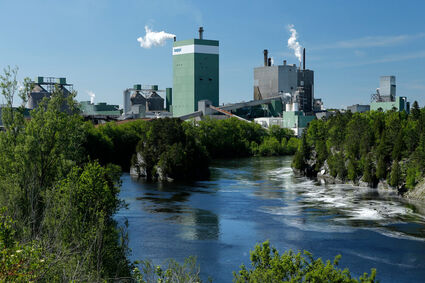 The efforts that have made the Cloquet Sappi mill a much more environmentally sustainable facility are not happening in a vacuum. The international pulp and paper company has been earning accolades for its sustainability efforts worldwide recently.

Locally, nationally and internationally, Sappi has been working hard at sustainability practices and people are taking notice.

In February, Sappi North America received the SEAL Business Sustainability Award for Environmental Leadership, in particular for the land application program at the Cloquet mill. On Dec. 3, Sappi North America won a different sustainability leadership award, this one for a reclaim and reuse project at its mill in Skowhegan, Maine. And in early December, all three regions where Sappi operates - Europe, southern Africa and North America - earned a platinum medal in the latest EcoVadis rating, given to companies who score in the top 1 percent for business sustainability.

Having a third-party company like EcoVadis give them top scores confirms that the company is doing more than talking about the environment.

"If you're doing something to reduce your carbon footprint, for example, you're improving the efficiency of your equipment, and that's going to result not only in a carbon reduction but more often than not, also a savings," he said. "Employees are very interested in businesses following a sustainability platform. They want to work for businesses that think that way, you see that more often, especially with the younger generation coming into the workforce these days. And with regard to the environment, that's good for the community where your mill is located or where you're doing your timber harvest. No harm to water supply or air supply - that's the health of the community you're talking about. So it's really that holistic view that I think is so important to business."

Being more sustainable is not a new initiative at Sappi globally or locally, said Robert Schilling, environmental manager at the Cloquet mill. He said there are many ways to measure sustainability, and Cloquet either leads the pack or is among the leaders company- and industry-wide. "The Cloquet mill has the lowest greenhouse gas footprint of all the Sappi mills worldwide, and we have either the lowest or among the lowest carbon footprints of any integrated pulp and paper manufacturing facility in all of North America, which is something we've been proud of for a long time."

Schilling knows how bad things used to be here. He remembers the smell of the paper mill when he was growing up in Esko.

It wasn't only the air that was affected by the paper mill, effluent from the mill once contributed to the pollution of the St. Louis River, which was considered one of the most heavily polluted waterways in the state in the 1970s.

Schilling credited the formation of the Western Lake Superior Sanitary District and changes implemented up and down the river to the water improving its health. He credits the new pulp mill with the change to the air.

Things like the land application program - which diverts lime mud and boiler ash to farmers to improve their soil instead of putting it in a landfill - helped even more.

Such programs don't happen spontaneously, Taft pointed out. The company has an innovation team in each region, which looks at ways to make the end product - whatever, wherever it is - more sustainable.

In Cloquet, Schilling said, they have Lean Six Sigma members who work to find ways to reuse the byproducts of the manufacturing process. "Their full time job is to identify opportunities to increase efficiency, reduce waste, save money, make things run faster and leaner, all focus on improving the bottom line," Schilling said, crediting the Lean Six Sigma program with identifying a lot of projects and ideas over the past 10 years.

The company's 2019 Sustainability Report highlights Ben Boyum, a process engineer in the Cloquet pulp mill, who identified a way to reduce the amount of lime mud used for filtering some of the chemicals. The end result means approximately 1,600 tons of lime mud (about 65 fully loaded semi-trailers) are not wasted each month, and thus kept out of the landfill.

Schilling said the local mill ultimately aims to send zero waste to the landfill. "Then the landfill we have will last forever," Schilling said. "It will never fill because we'll get so good at reusing and recycling our waste materials."

That would be good for the community, the company and Mother Nature.