Korby's Connections: Mentors can be unforgettable 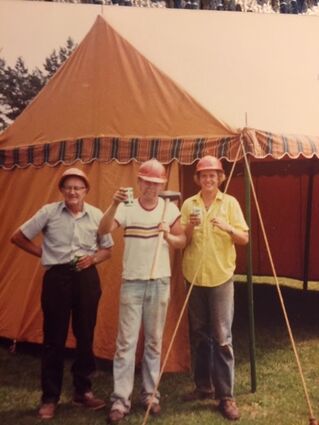 Norm Johnson, Steve Korby and Colin Gray take a soda break from putting up tents at the Cloquet Country Club for the Cloquet Invitational in July 1975.

Fifty years ago, I had my first worksite mentor. He and I didn’t choose each other; it just happened that way. As you read this, think of your potential role as a mentor or mentee. It is an important function, now and always has been, at in our worksites and in the community. I thought about the crucial subject when I was interviewing Dakota Koski, executive director of REACH mentorship, for another Pine Knot exclusive story.

My story begins in 1970. I had just proudly received my driver’s license with a score of 96. My younger sister’s best friend was the daughter of the greens superintendent at the Cloquet Country Club. Whoa ... that’s a little hard to follow, but the Cloquet Country Club greens superintendent (John Lightfoot) asked my sister if she thought I may be if I was interested in a summer job being a laborer at the golf course. It worked out that I called John, had an interview, and I got the position at a whopping $1.50 per hour. I had two of the qualifications he was looking for, namely ,: I could drive vehicles with a stick shift and I could get to work at 6 a.m.

Back then, the paper mill — Potlatch — was responsible for the golf courses operation and bottom line. Lightfoot was a Potlatch employee and worked inside the mill when he wasn’t at the Cloquet golf course, so, approximately November to March. He received his paper mill wages and benefits while working at the golf course. To me, it seemed like a pretty good deal and, had it continued to be available, I probably would have jumped at it as a career path.

John taught me how to cut greens, fairways, tees and collars, and along with every other piece of grass on the course. A little scary for a sixteen 16-year-old, but with instruction, he also let me also operate a chainsaw, sprayers, aerators, sprinkler pumps, you name it. John was a great mentor to me himself, but this story is about another hired hand at the golf course that wasn’t my boss. His name was Norm Johnson. He was also my mentor and maybe didn’t even know it. Both Norm and John have long passed away so they can’t dispute any of these facts.

What is a mentor? Per Webster, “an experienced and trusted advisor who is a positive guiding influence in another (usually younger) person’s life.” A guide, confidant, coach, counselor, tutor. I think mentorship could, somewhat, be in the eye of the beholder, and it goes both ways, with both the mentor and mentee gaining from the experience.

Norm came to work at CCC the summer after I had first started. He was in his late sixties and had three fingers missing on one hand. It was due to an industrial injury/accident he’d had many years in the past. He was bald, had gray hair on his temples, liked to swear, knew nothing about golf (he was a farmer), smiled when he’d have an occasional cocktail, was a bachelor, and smoked a lot of cigarettes. Now, does this sound like anyone you’d describe as a great “mentor”?

On one of the first days after he started, John Lightfoot asked me to go and show Norm how to rake sand traps. I’m 17, grant you, and Norm's 67. It felt weird.

We didn’t have a machine to rake the traps in those days. The club had a big, heavy, homemade wooden rake with large nails pounded into the front board acting as teeth. To smooth out golfers foot prints and divots, the “operator” would pull the rake back and forth through the trap, leveling it, and subsequently covering their own footprints. I kidded Norm and told him after watching and supervising him for 24 more traps — the total number left on the nine hole course at the time, — he’d be able to handle it. It was a simple task, but, in so doing it together, we became friends.

In the next few days, I had the assignment, with John present too, of demonstrating to Norm how to cut greens. In 1971, CCC had walk-behind, self propelled mowers. The mowers were set at a humming good pace, and you had to go back and forth to make a pretty “pattern” on the green. I wondered if his hand with the missing fingers would make turning and reversing difficult, but Norm handled it with no big issues. Two workers cut five greens every morning, including the practice green. There were nine holes and the practice green, so each had five. One greens mower would take holes 5-9 and the other 1-4 and the practice. Norm always cut the front five and I would take the back five. He steadily got better and better and eventually, started finishing, where we washed our mowers, ahead of me. Frustrated, I figured on this special morning, I’d prove a point one morning. I put my mower on full throttle, ran between emptying baskets of clippings, had my truckster in high gear between holes, got done, went to wash my mower, and Norm was already there smiling and saying good morning. Beat by an old man, dang.

On a terribly hot summer day, Norm and I were digging a trench for a water line through rocky soil with No. 2 shovels. We had limited heavy equipment. I couldn’t keep up to Norm shoveling, either. Exhausted, sweating, and thirsty, we decided to sit down, get a drink of water and take a break. I heard Supt. Lightfoot’s golf course motorized buggy approaching and I popped up to my feet from the ground. Norm told me to sit back down. He said if the boss thinks you only work when he or she is around, they’ll lose confidence and respect for you as a worker. He asked me if I thought we needed and deserved a break. I said yes. John eventually drove up and inspected our work and asked if we were taking a break. When we confirmed, he thought it was indeed needed. Norm was smart, shucks.

Every morning when I got to work at the CCC maintenance building, Norm was already there. At 5:55, Norm was there, or 5:45, he was there making coffee. One day, I got there about 5:35 a.m. Norm was just getting out out of his car; he still beat me.

What did I learn as a teenager? Be prompt, don’t miss work if you can. I also figured out that it was more important to be a past farmer than to know anything about golf. Norm had a few tricks he showed me to improve efficiency and keep things running — he could fix any piece of equipment.

Rarely was work ever canceled. It had to be nearly a monsoon or other horrific weather. It happened 2 or 3 times in the seven summers I worked there. But Lightfoot called me early one morning and he said to stay home: it was pouring rain and expected to last all day. Before I could go back to bed, the phone rang again.

It was Norm and he asked me what I had planned for the day. Schedule was open. He said he was going to come and pick me up, go to breakfast, and then go to buy a car. Imagine that. I watched and listened and learned, after we ate, as he haggled on the price and signed the paperwork and came to work the next day with a “newer” car. Norm demonstrated business savvy.

Knowing the health risks, as mentioned, Norm was a heavy smoker. I always remember him with a cough. He rarely smoked while we were at lunch or in the break building/shack. Norm told me as a warning that if he ever caught me smoking, he’d cut off certain parts of my anatomy that I was rather fond of. I never smoked cigarettes. He would have followed through with his threat. Still, he knew it was a bad habit and was hurting his health. He was trying to protect me.

After I finished college and got a full -time job, I was sadly done working on the CCC greens maintenance crew. I had worked there seven summers. I stayed in touch with both John and Norm.

A few years later, the CCC golf pro/manager told me Norm was very ill and in the hospital. He said Norm was even having trouble recognizing family members. When I went to visit him in the hospital, heNorm was sleeping and I was going to leave him a note. He woke up, opened his eyes, and said “Steve, what are you doing here?” We had a nice chat and I felt very good and proud that he recognized me. Norm was very ill. I was crushed when a few days later I found out that my friend and mentor had passed away. He died from complications of lung cancer. I certainly haven’t forgotten him.

Of course, after Norm and John, I’ve had many future mentors in other jobs and in my career. All were appreciated and valuable. As time went on for me, growing up from a kid to an adult, however, I did notice that people were surprisingly coming to me for advice. My first question to them was in jest, “Seriously?” But, I found out that I maybe did have something to offer and often have assumed the role of mentor.

Usually, younger people just need someone to listen to them and care. They can come to their own conclusions of which fork in the road to take. Whether it’s coaching, scouts, church, reading in classrooms, formal mentorship programs, clubs, community education, chaperoning — when the pandemic settles down and we return to some form of normalcy — get out there and support kids. Become a mentor. It will be appreciated for years.

Be a mentor too

In Carlton County, REACH (which stands for Recreational Experiences Achieving Community Harmony) is looking for a few good mentors to mentor local youth, individually or as part of a group setting. Volunteers can volunteer in any capacity that works for them. With group mentoring, mentors can come once a month, once a week, or to every activity held, whatever works for them.

Want to volunteer or participate in REACH activities? Call 218-499-4293, stop by the office at 1001 Stanley Ave. by Walmart in Cloquet or visit http://www.reachmentoringprogram.com.

Editor's note: This is a longer version of Korby's Connections than appeared in the print edition of the Pine Knot News.