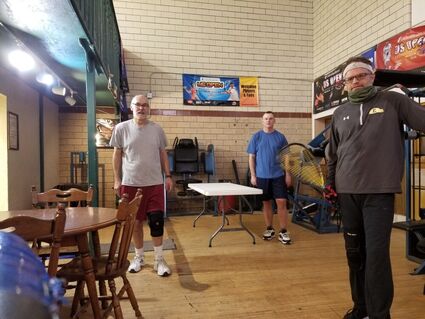 From left, Tim Michaelson, Tim Tollefson and Tim Lindquist prepare for one of their frequent "cutthroat" meetings on the racquetball court. The trio have known each other since 1968 and they've been meeting regularly at the Cloquet Racquetball Club since 1982.

Many famous people and things come in threes. Think of Crosby, Stills and Nash; The Three Musketeers; the Three Amigos; or The Three Stooges. Locally, you can add "the Three Tims" to the list.

Tim Lindquist, Tim Tollefson and Tim Michaelson are all friends and 1978 graduates of Esko High School. All three have played racquetball together at the Cloquet Racquetball Club at the old Leach School on Park Avenue since 1982. A competitive spirit and a good sense of humor keep them going.

"We've known each other since 1968 when we were in third grade at Washington school in Esko," Tollefson said....