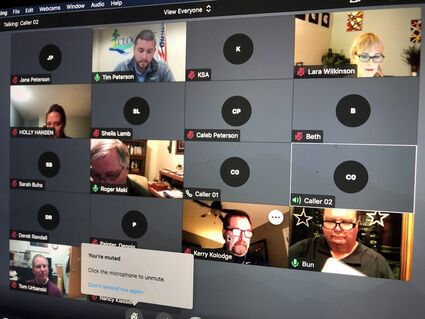 The Cloquet City Council meets online, with people joining either by video or phone. Lyz Jaakola was Caller 02 Tuesday, her square is highlighted in this photo because she was repeating her oath of office when this photo was taken.

Cloquet's newest city councilor, Elizabeth "Lyz" Jaakola, was sworn in Tuesday in a most unusual format, with city administrator Tim Peterson asking councilors and anyone watching the virtual meeting "to imagine" a more conventional ceremony. In reality, Jaakola was not visible as she held her hand up and repeated the oath of office as "caller 02" on the GoToMeeting screen.

Jaakola's arrival brings the total number of wo...