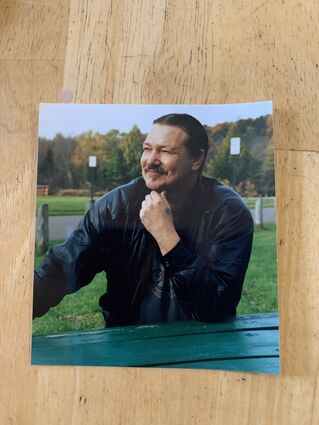 LeRoy DeFoe died Dec. 20, a day after his 72nd birthday. He was a tireless advocate in preserving the legacy of the Fond du Lac Band of Lake Superior Chippewa.

It was a cold morning at the edge of the Old Holy Family Cemetery. This is where LeRoy DeFoe was put to rest on Dec. 28. It's important to note that fact, since DeFoe spent many years discovering long-forgotten gravesites and cemeteries on the Fond du Lac Reservation.

DeFoe died Dec. 20, a day after his 72nd birthday and just a few months after a cancer diagnosis.

"It was an honor knowing him," said Christine Carlson, who regarded him as a historical "cohort" when it came to preserving the legacy of the Fond du Lac Band of Lake Superior Chippewa.

The pair worked on several projects together, especially in the historic village of Fond du Lac along the St. Louis River, where a cemetery was preserved and a bridge renamed Biauswah to honor Ojibwa warriors. In 1990, the band began cleaning up old cemeteries and DeFoe was brought in to map them. That led to the grave identification process that continues today. DeFoe was the cultural resource specialist for the band.

Yes, there were projects, Carlson said, "we were a good team. ... Then we became friends."

Carlson writes a history column for the band's monthly newspaper, Nahgahchiwanong Dibahjimowinnan. She said DeFoe's dedication to historic preservation began with his own family. "He was inspired by his own people," she said. "He always spoke of them with such honor and love."

He was a renaissance man on the rez. He began in the early 1980s as a bus driver for the Ojibwe school. Carlson provided a biographical sketch DeFoe wrote explaining his preservation work. While working for the school, he learned about protests at Wisconsin Point in Superior regarding the "deplorable" condition of a Chippewa burial ground there. He joined in an occupation that got the area cleaned up and marked. He also was involved in saving the cemetery in east Superior from slipping into the Nemadji River. It was where graves were interred after the grounds on the point were subject to development.

DeFoe was also a welder, worked in maintenance, and was a draftsman and artist, creating the band's logo in 1981. He had moved to Minneapolis in the 1970s to study mechanical engineering but became attached to Indian studies, he wrote, recalling his involvement in creating the logo. "I got tired of being broke all the time," he wrote, "so I moved back to the rez."

He said he lived in a tent and took any job that came his way.

DeFoe grew up in Fond du Lac. In 2013, he wrote in the monthly newspaper about what likely sparked his interest in history. The preservation office was collecting evidence on Spirit Island in considering it a national historic places.

"Growing up, I had two friends who had a father that used to take us camping down by the St. Louis River. At night, we'd sit around the fire, and just joke around with each other. Then, finally, came the time of the story telling. My friend's father was a great story teller. When he was talking, all of us kids would behave, sitting for hours listening to his stories. As for myself, I always had a good imagination, so as he talked, I could picture the story he was telling in my mind."

"His story would take hours, and except for occasionally adding another log to the fire, we would just sit there fascinated, listening to his every word. Even the frogs would stop croaking until the end of the story, and then when he was done speaking the frogs would start up again. We used to say that the frogs were listening too."

DeFoe was determined in his cemetery work. He couldn't stand for history lost with families not knowing about those from past generations.

"There are so many people out there who don't know where their relatives are buried," he told a local newspaper in 1993. "I feel that it's important we remember who passed before us. We have to show respect for them. We must not forget them because they are our history. They are our tie to the past."

Carlson and DeFoe gave tours of historic places. They enjoyed trekking out in the woods and talking, she said. In writing about him in her column in 2018, she remarked on his humbleness. "It has been an honor to work with you dear friend. I know you want to be in the background and take no credit for your many accomplishments, but you have really made an impact on my life and the lives of the many good people of this reservation and community."

"Sometimes I sit here and think about all these people," he said in a 1994 interview at a cemetery he was working on. "That at one time they were living. That they had hopes and dreams, they had a whole life to live. And that they're not here anymore ... I feel like I've discovered where I came from. And I'm not afraid to die anymore because I know where I'm going - to meet my ancestors."