There's a space crunch at the fire hall 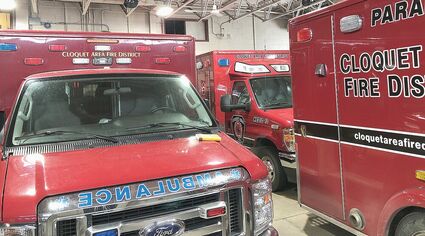 The Station 1 building in Cloquet has parts that date back to the 1960s, while others were added on in the 1990s. The Cloquet Area Fire District is out of room and wants state funding to build a new fire hall.

The motto of the Cloquet Area Fire District when it concerns the state legislature could be phrased this way: "If at first you don't succeed, try, try, try, try, try again."

For at least the fifth time since the district was formed by legislative action in 2009, the fire district is making a request of the state legislature. This time it's for a new building as it has outgrown its current home.

In the past, requests have ranged from fixing mistakes made by the legislature when it formed the fire district - allowing it to bond for and incur debt - to changing the EMS levy to paying for a new combined fire station for the district.

While the district got the ability to bond for a new fire truck, or even a new fire station from the state in 2019, CAFD officials are hoping the state legislature and the governor will pass a bill this year that would pay half the cost (an estimated $6.85 million) of building a new fire station. The other half would have to be matched by local sources, which could mean an increased local tax levy by the fire district, grant money, or both.

CAFD chief Matt Ashmore is optimistic about the chances. It wouldn't be the first time the state has funded a public safety building. In a special session bonding bill passed in October, legislators and the governor approved $9.5 million for a public safety center and training facility for police and fire in Virginia, and nearly $2 million for a new public safety facility in Chisholm, covering half.

"We would only get 50 percent, but that's a drastic contrast to ... 100-percent funded by the local government," Ashmore said. "Now at least the state has opted to look at the possibility of funding certain projects around the state at a 50-percent match."

Ashmore, who is new to CAFD, said he thinks this is only the second time the fire district has asked for funding for a new building. As of Friday, Jan. 15, the bill had been moved to the Development and Finance committee in the House, and the Capital Investment committee in the state senate.

"Our lobbyists say there's upwards of 1,500 bills that are still waiting to be introduced, so we're off to a good start," he said.

While CAFD officials and board members hope a new fire station will come to fruition in future years, they continue to make improvements at Station 1 in Cloquet, parts of which date back to the 1960s, while others were added on in the 1990s. They took over the building when the police department moved to the new City Hall building in 2019, and things have improved. Fire district offices are now in the same building as the full-time staff and fire equipment. The leaky roof has been fixed. An office was changed into a dorm room for two, which means there are now permanent - if not private - sleeping rooms for all nine of the firefighters who sleep at the station during their rotation. Normally a full-time firefighter will spend about 10 nights a month at the station.

What it didn't give them was more room to park fire trucks and ambulances - which are wedged in the garage almost bumper to bumper - adequate space for training, or a good heating and ventilation system. It also didn't give them any space to expand, as the station sits between busy Cloquet Avenue and a residential neighborhood. CAFD has land for a new station near the former Diamond Brands plant.

"The status quo doesn't fit the service needs of the fire district versus what the fire department was before," Ashmore said. "We've basically doubled our staff throughout the district and we've also added multiple staff here. As a fire department, there were six dorm rooms for firefighters (former jail cells) and now we have nine people per shift.

Maintenance on the aging building is high, and the insulation is almost nonexistent so energy costs are high too. "Why should we be paying for the maintenance on a building that doesn't fit our needs, we should build something new and maintain that building instead, one that actually works for us."

CAFD captain Chad Vermeersch put it simply: a new fire station would be more efficient and safer. Which means both fire and ambulance services can respond to calls that much faster.

The heating system in the current building has three boilers which don't all work, and an air handling unit that Vermeersch described as a "trainwreck." The training room is too small for the 60-plus full-time and paid-on-call firefighters, plus hundreds of thousands of dollars' worth of larger training equipment has to be stored and used at Station 3 in Scanlon. The radio dispatch in the building is difficult to understand - "you get used to it," he said - and the ventilation is poor.

"Can we survive without a new building? Yes. We always do," Vermeersch said. 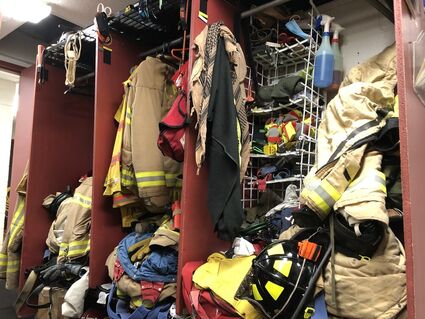 Locker spaces are crammed with gear at Station 1.

The 21-year firefighter shared his wish list of three things. "Not having diesel exhaust and the carcinogenic fumes from our turnout gear in the same ventilation system would be great. A radio system I could understand. And heaters that work."

Made up of the member communities of Cloquet, Scanlon, Perch Lake and Brevator, CAFD also provides structural fire protection under contract to the Fond du Lac Band of Lake Superior Chippewa. The total area covered by the fire district including the Reservation spans 170 square miles. CAFD also provides ambulance service to a state-mandated area of more than 250 square miles in Carlton County and southern St. Louis County.