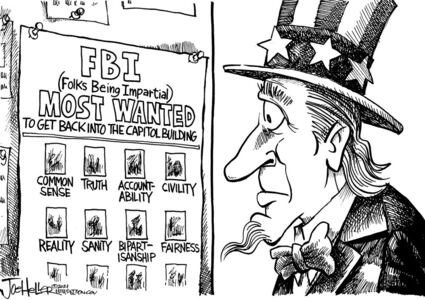 I was supposed to be in Washington this week, but I canceled my plane tickets in early December. We had been planning to attend the inauguration, taking advantage of Martin Luther King Jr. Day to reduce the number of missed school days for the kids, and had booked an Airbnb for the week, where the kids could distance-learn while in Washington.

But when we learned that Joe Biden was allowing only a very select few to attend the event due to the coronavirus, we realized we would never get into the event and decided we'd try again in four years.

It's a shame, because this would have been our third inauguration in a row. We attended Barack Obama's second inauguration in 2012, when the boys were still little, as my wife had business in Washington that week. It was a great, cheerful affair. Sunny, and very cold, it seemed warmer as perfect strangers reached out to each other in a celebration of democracy, hope and unity. Dozens smiled and cooed at Patrick, still in a stroller, and Tommy, who was eager to talk to anyone who would talk back. And there were many. We spent about 10 hours on the streets around the National Mall, never quite getting into the actual festivities. But we saw and heard plenty, and it was an exciting and inspiring experience.

Apropos of nothing, Tommy learned to swim the next day on that trip, swimming across the hotel pool on his own for the first time. It was a great trip.

Four years later, we were living in Alexandria, Virginia just a few miles from the Capitol. We decided to take the Metro downtown and see the festivities. I wasn't too pleased with who had won the election, but I thought, "I'm here, I might as well let the kids experience another inauguration." And it was quite an experience. The people were definitely different than the people we encountered four years before: these people were mostly white, and it seemed everyone was smoking. This time the weather was cold but wet, but just like last time, perfect strangers reached out to us during a celebration of democracy, hope, and unity. Dozens smiled and laughed at Patrick, who had a habit of saying funny comments like "Make pancakes great again!" And Tommy, still eager to talk to anyone who would talk back, found quite an audience of very pleasant visitors, celebrating the inauguration of the candidate they had supported. Again, we spent most of the day around the National Mall, never quite getting into the actual festivities. But we saw and heard plenty, and, again, it was an exciting and inspiring experience.

In some situations, there may really be very fine people, on both sides.

So, I am irritated that if we had decided to go to Washington D.C. this week anyway, we would not have been welcome. City officials and federal agencies warned Americans to stay away this week, after the insurrection on Jan. 6. Fear of more violence and lawlessness led to armed guards everywhere, roads and parks and public places closed off to the public, and a general sense of unknown and fear in the nation's capital. You're not welcome in the capital. I'm not welcome in the capital. Citizens aren't allowed to attend an inauguration. We let the terrorists win.

Most supporters of the last president don't want to secede from the country because their candidate didn't win. Most Americans are patriotic and love their country, just as citizens from around the world are proud of their homelands. Sometimes political arguments go a little too far. Sometimes we let the rhetoric grow and grow until all we are listening to is spews of irrational thought from the extremes on each side. And sometimes we take up arms against a government injustice so great that bloodshed just might be inevitable.

This was not one of those times. Even Mitch McConnell said the insurrection was based on lies fed to the former president's most loyal followers. There is nothing more unpatriotic than violently disrupting a routine democratic process simply because you didn't like the outcome. It's like slapping someone around to let them know how much you love them. It's sick. It's anti-American.

Sure, I'm angry, but I'll get over it. Our democracy will survive; enough people on both sides believe in this experiment called "America." I'll book a room for the next inauguration in four years, confident that everyone will be welcome to celebrate then, regardless of party affiliation, just like years past. My tradition will continue.