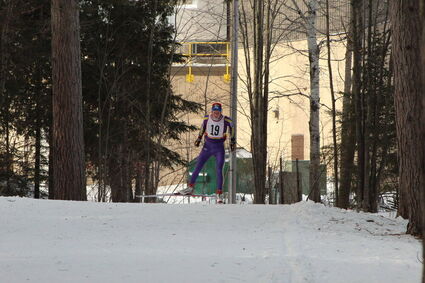 Cloquet's Josh Sanders sports an icy beard and moustache toward the end of Tuesday's frigid Nordic ski race at Cloquet's Pine Valley. Sanders placed third in the boys varsity race in a time of 15:45. As a team, Cloquet won the boys race with a score of 386, while Marshall had 370 points and Mesabi East had 367.

Despite less than ideal snow conditions, the Lumberjacks Nordic ski teams are off to a fast start in this year's ski season.

Still ranked in third place by skinnyski.com, the boys team won both of their first two meets handily, beating Proctor and Denfeld at Spirit Mountain Jan. 14 and Mesabi East and Marshall in a tri-meet at home Tuesday. At Spirit, CEC had five boys in the top 10, and six boys in the meet at Pine Valley this week. It's a deep team, as the boys returned all but one of their top skiers from last year's state team.

Conditions were frigid and icy at Pine Valley on Tuesday, so times were fast, as long as skiers could stay on their feet. Top boys skier Benjamin Bauer placed first at Spirit and second at a home meet to Marshall's Declan Hutchinson. Hutchinson finished the 5.5K race in 14 minutes and 25 seconds, Bauer in 14:378. CEC's Josh Sanders took third in 15:45. Sanders, however, may have won the icy beard award for his blond icicles after the race. It was that cold, with temperatures hovering around 5 degrees and maxing out at 9 degrees Tuesday.

On the girls side, Halle Zuck placed second at Spirit and third at the home meet Tuesday - in just her second year of competing as a Nordic skier. At Spirit, other top finishers for the Cloquet girls included Elsa Mowers, Harmony Tracy and Megan Chopski, taking seventh, eighth and ninth place. On Tuesday at home, Mowers finished in fourth place behind Zuck and the next four CEC girls to finish were Anna Carlson, Tracy, Chopskie and

Jazlyn Gunderson, coming in ninth through 12th place respectively. Missing from the girls team in the first few meets is Charlotte Ripp, who is training in Lake Placid for ski jumping through the end of the month.

Although the Minnesota State High School League relaxed its ruling requiring skiers to wear masks or buffs, allowing them to ski without face coverings during races, the skiers still have many Covid precautions to follow. Gone are the long lines of skiers waiting to start; now, the lines are limited to about six skiers at a time, standing a few feet apart. They can't gather in the chalet to warm up after a race either - on Tuesday, Cloquet-Esko-Carlton skiers were told to come a short time before their race to warm up and to leave as soon as possible after their race.

Assistant CEC coach Tim Stark said he thought the MSHSL decision was a wise one.

"Our races are physically demanding and we saw a number of skiers at our first race struggle to compete with this requirement. Our sport does not have breaks or pauses in action like other winter sports," he said, adding that student athletes have to mask when they are near others, the start and end of practices and all times when not racing at meets.

In addition to the changes due to Covid, meets are different. They max out at three teams at races that might see a dozen teams competing in a normal year. Instead of the standard 5K meets, the first meet was a 6.5K and Tuesday was 5.5K.

"Given the smaller size of ski meets this year, coaches across Section 7 made the decision to offer greater variety in our meets to keep things fun for our skiers," Stark said. "Later events will include a skiathlon where skiers will race both skate technique and classic in the same event. We are also attempting to include a relay event this year to keep things interesting and fun."

Stark said he's been really pleased with the performances from a lot of the athletes. He pointed out Zuck as a standout: "Her first two meet performances are showing some definite payoff from a lot of training prior to the start of the season." Stark said he expects both Ripp and Zuck to be in strong contention to make the state meet as individuals. 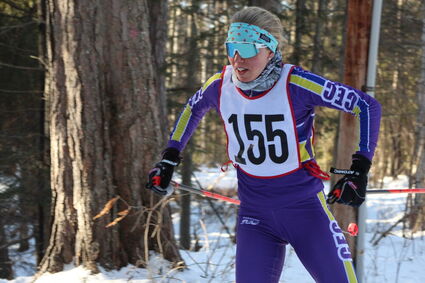 "We have close to 10 girls who are ready to make some gains this year too," he said. "If that happens we will be in strong contention for the Lake Superior Conference title."

He also acknowledged the boys team.

"They are hoping to build on last year's successful eighth-place state meet performance," Stark said. "Benjamin Bauer is poised to repeat his all-state performance from last year. Josh Sanders is another member of our team who will also be in contention for this. Cale Prosen, AJ Maijala, Miles Fischer, Jordan Chopskie and Henry Slater round out a team that is deep in ability and experience, and hungry to show what they can do this year."

In total, the Lumberjacks have 60 skiers out for the team, from junior high through high school

The next home meet for the Lumberjacks is Feb. 4, starting at 11 a.m. Spectators also have to follow Covid guidelines and wear masks at all times.