Skaters work out the kinks 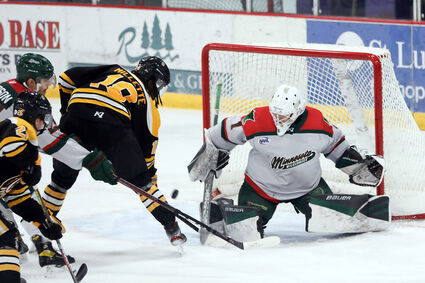 Junior hockey returned to the Northland this past week as the Minnesota Wilderness opened 2021 with a pair of road games and their first home game of the season, with mixed results. The Wilderness fell in back-to-back games 3-0 on Friday and 3-2 on Saturday to the Janesville Jets on the road. Those losses were followed by an impressive 4-3 win over the Austin Bruins on Sunday evening at Northwoods Credit Union Arena.

The Wilderness had the tough task of opening against Janesville, which had already played in double-digit games due to less-stringent Covid restrictions in Wisconsin than in Minnesota. That played a big part in the pair of losses on the road.

"We knew going into our first game that Janesville was in mid-season form, while our guys were [practically] playing our first games," said Wilderness coach Jon Vallaincourt. "It's a challenging situation but that is the position we are in. I am just grateful that we are having a season for our players to compete in and showcase their abilities. We are faced with a difficult situation, but as the old saying goes, 'adversity builds character.'"

While the Wilderness just got back together in early January, many of the other teams in the league, including Janesville, have been together since September. both practicing and playing games. Compare that to the Wilderness, which played a total of three away games before their season got put on hold in November.

"We had our players report back for team activities Jan. 4 and we had two weeks of practice time before our first weekend of games," Vallaincourt said. "Most teams have been together or on the ice since September."

The advantage worked well opening night for Janesville, but the Jets needed to hang on to win Game 2 in a tight affair that saw the Wilderness shake off their rust and play well.

"We spoke as a group about being better defensively after the first game and improving on some of the fine details," Vallaincourt said. "I thought our team as a whole improved over the weekend, but I really like the way Gunner Thoreson and Christian Galatz played. Both of our goalies were very good and gave us a chance to win."

Galatz played high school hockey for Cloquet-Esko-Carlton before playing full-time for the Wilderness.

In their first home game Sunday night, the Wilderness blew out to a 3-0 lead, but Austin fought back to tie the game. Former CEC forward Gavin Rasmussen gave the hometown Wilderness a 1-0 lead just 4:11 into the first period on a shorthanded goal with assists to Thoreson and Evan Bushey. Mitch Allard made it 2-0 at the 9:53 mark with assists going to Jacob Herter and Levi Stauber. Finally, the Wilderness went up 3-0 at 13:38 on a Josh Bohlin goal with assists to Nick Marciano and Jacob Badal. However, before the first period ended the Bruins cut the lead to 3-1 on a goal by Alex Trombley.

"It was great to finally play at home in front of our own fans, even better to win on opening night," said coach Vallaincourt. "I thought we came out in the first and played really well, still a bit sloppy with the puck, but we competed hard." 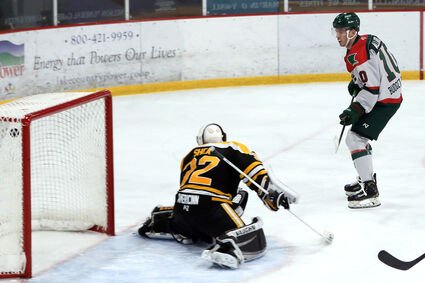 The Bruins scored the only two goals of the second period to tie the game as they sent the game into the third period tied at 3-3.

The third period saw no scoring and the overtime period was the same as the third, so regulation-ended tied at 3-3.

"Kaleb Johnson did a great job on making some timely saves for us," said Vallaincourt.

The game then entered a shootout period with Austin shooting first and Johnson coming up big with a stop. Rasmussen shot first for the Wilderness and buried the puck into the back of the net, giving them an advantage. Johnson then shut down the next two shooters for the Bruins, giving them the win.

The Wilderness play at home again this weekend: on Saturday they face Austin at 7:35 p.m. and Sunday they play the Kenai River Brown Bears at 7:15 p.m.