Wrestlers rebuild in age of Covid 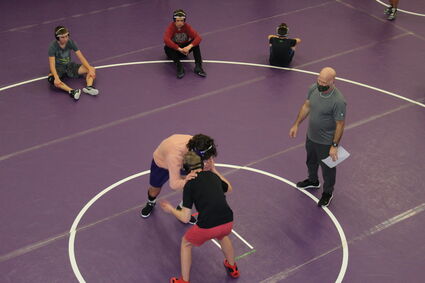 The wrestling practice gym at Cloquet High School is awash in purple as Deeken Fjeld and Aydan Mattson demonstrate takedown techniques to the group Monday. Head coach Al Denman said in addition to becoming better wrestlers in a challenging pandemic year, he wants wrestlers to also focus on resilience and gratitude.

In a sport that requires true grit, the Lumberjacks wrestling team faces two additional challenges this year: numbers and Covid-19.

They lost five seniors to graduation last year, and another four teammates to Covid concerns. They returned 11 potential varsity wrestlers, and another four who wrestle junior high. There are 14 weight classes, from 106 pounds to 285.

"We can only fill six of those this year," head coach Al Denman said. "We have a number of athletes who weigh pretty much the same, so someone has to sit out and wrestle JV."

Every empty weight class counts as a forfeit to the other team and gives them six team points.

"Needless to say, the team scores were quite lopsided due to so many forfeited weight classes," Denman said, referring to the team's first triangular meet last Friday, when the scores were Ogilvie 48-Cloquet 24 and Grand Rapids 72-Cloquet 9.

But Denman isn't focusing on the scores.

"We are not going to win many matches as a team, but wins and losses are not and should not be the primary goal of high school athletics," he told the Pine Knot this week. Instead, his goals are to keep his athletes and staff safe and healthy, and to teach them resiliency and gratitude.

"Resiliency through not only what is arguably the most challenging sport in high school athletics, but also resiliency through tough social times through problem solving and adaptation," he said. "Gratitude through the realization that so much of what we have can be taken away, and that to be a wrestler is a gift and a privilege."

The Lumberjacks have a range of talent on this year's team.

No masks for wrestlers

While many other indoor sports require athletes to wear masks during competition, wrestling - the sport in which athletes are closest physically to their opponent - doesn't.

"The combat nature of the sport does not allow for the use of a face covering while practicing or competing," he said. "The mask would constantly be pulled down or torn off. Additionally, the ear strap loops would be trapped under the protective head gear and there would be the potential for ear damage as the mask is forcibly torn off. We do have to wear masks when we are not in contact situations for practice and competitions."

Cloquet was fortunate to already own two ultraviolet C (UVC) sterilizers, a result of past fundraising efforts. Each sterilizer uses special light tubes that emit a specific wavelength of ultraviolet light that dismembers all microscopic pathogens it comes in contact with ... even the Covid virus. Denman described one as "like a large rectangular lawn mower that is pushed across the mat surface." The other is a freestanding tower unit that sterilizes the entire room. They sterilize the practice gym twice a day.

"For competitions, the MSHSL rules say we have to sterilize mat surfaces before warmups, after warmups and between dual meets," Denman said. "For a triangular this would require five or six sterilizations. Using water-based sanitization solutions eats up a lot of time so we have been offering to bring our mat UVC unit. It takes only five minutes to sanitize an entire mat."

To keep numbers down, there are no tournaments this year, only dual and triangular meets. And coaches have to go the extra mile to make sure everyone is safe, taking temperatures and a health assessment of each wrestler before entering the practice room or before they enter a competition space as well. 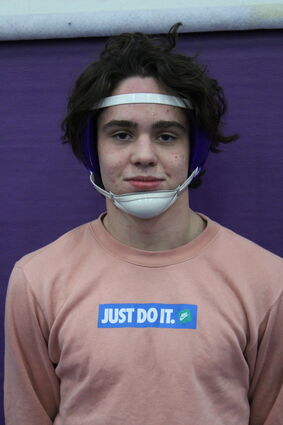 Deeken Fjeld is captain of Lumberjacks wrestling team. He is wrestling at 145 pounds this season.

"All of this data must be recorded on a daily basis," Denman said. "Even bus seating patterns are assigned and recorded. Headgear is dunked into a bleach solution when practice/competitions are done. The soles of the wrestling shoes are wiped clean on a towel soaked with sanitization solution before entering the wrestling room. I see many of these new sanitization practices remaining in play after the pandemic leaves us."

Just like the skills his wrestlers learn will stay with them in the years to come.

"This young team will use the 20-21 season to develop the physical and technical skill sets they will need for a brighter post-Covid season that awaits them next year," Denman said.

Cloquet has a meet in Proctor on Jan. 26 and home meets scheduled for Feb. 2, 9 and 26. Contact the school to find out more about watching meets in person or online.