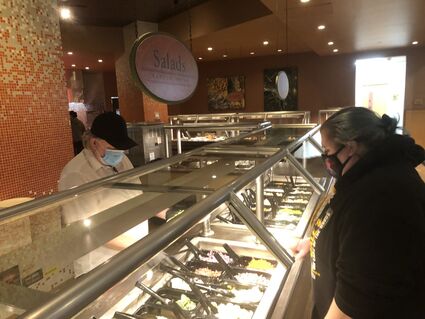 The popular Black Bear Buffet is now serving cafeteria-style. Instead of helping themselves to food, customers now walk through the cold or hot food line and tell a server on the other side what they would like on their plates. Ron Frank helped Ann Siekkinen last week.

It's not quite business as usual at the Black Bear Casino Resort, but general manager Dan LaPrairie said staff are working hard to stay open and keep people healthy during the pandemic.

So far, so good, LaPrairie said.

"We are doing a balancing act here, compared to what we normally do," LaPrairie told the Pine Knot News last week. "We normally have 2,000-seat concerts, and we do drawings and we try to fill this place with 6,000 people. So it's been a balancing act with what we do as far as attracting a crowd, but also being able to do things safely."

They've tackled that issue with a combination of procedural changes and renovations as well as limiting guest numbers.

There are large plexiglass barriers etched with the Black Bear logo between every slot machine, and social distancing markers throughout the casino and its various restaurants. Staff stand at the entrance, taking the temperature of everyone who enters, checking IDs and Players Club cards, making sure that people are wearing masks. Customers are asked to wear masks when not eating or drinking, follow social distancing floor decals and policies, use hand sanitizers and tell staff if they'd like their area or machine sanitized. The ventilation system and air filtration system were upgraded and electrostatic cleaners purchased, courtesy of CARES Act funding. The entire casino floor has been nonsmoking since July. "It was counterproductive to require a mask and allow smoking," LaPrairie said.

After reopening slowly - and closing to all but carryout during the Covid peak in November and early December - the restaurants are open again. They're arranged at less than 50-percent capacity. "So even if all the tables are full, we're still below 50 percent," LaPrairie said.

That also includes changes at the popular Black Bear Buffet, which is now cafeteria-style. Instead of helping themselves to food, customers now walk through the cold or hot food line and tell a server on the other side what they would like on their plates. Any customers going through the food line are asked to sanitize their hands first and wear masks.

"You'll go to the station, and servers wearing masks and gloves will take your plate. You can tell them whatever you want, mashed potatoes and a little more gravy, whatever," LaPrairie said. "At the end of the line, you take your plate, sit down, and enjoy your buffet."

That's precisely what customer Ann Siekkinen planned to do with a plate of salad last Thursday afternoon. The Minneapolis resident was on her way farther north, but stopped to gamble on the way.

"I won, so we're going to eat and go fish," she said, one of only a handful of customers in the restaurant Friday around 3 p.m.

LaPrairie said the buffet had been closed for nine months when it reopened before Christmas - a time when other restaurants in the area were still closed to in-person dining.

That's because Fond du Lac Band officials, and not the state, are responsible for deciding whether the casino resort is open or closed during the pandemic. As a tribal enterprise, the casino has to follow federal law, not state law. But the end goal was the same - preventing the spread of disease - so many of the actions taken by the state and the Band were very similar.

"When we decided that we were going to open up, it was right around the time that the original (state) restrictions were close to expiring," LaPrairie said. "The wheels were already in motion here; we knew what we wanted to do as far as the capacities of both venues, we'd set up social distancing and changed the operation of how we do things."

They felt good about giving their customers a place to come over the holidays when most other places were closed down, he said.

"Right now in our food venues, we're looking at probably about 20 percent of what we normally would do pre-Covid," LaPrairie said. "We really couldn't come back with only 20 percent of our staff, we had to bring more than that, so like most places, we had to raise some prices."

LaPrairie gave a lot of credit to the 411 employees at the casino resort, for doing whatever it took to get things running smoothly and safely. 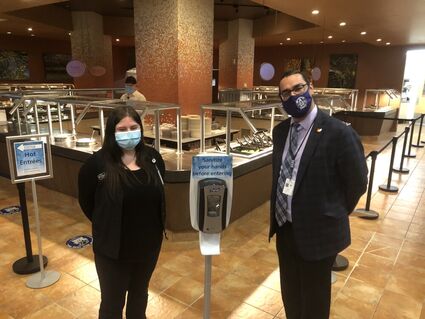 "That's down from 800 about a year ago, so the pandemic has affected staff numbers too," he said.

They follow strict guidelines regarding possible symptoms - stay home if you have even one - and quarantine after possible contact. They did their own contact tracing when the state was overwhelmed. And they are currently working to develop a priority list of staff members who want to be vaccinated, and are working with the tribe to get those done when it's their turn.

Earlier this week, the casino held a mass testing event for staff, with plans to test regularly in the future.

"I'd like to incorporate this into our Black Bear bubble, if you will," LaPrairie said, referring to the NBA and its basketball bubble. "I want staff to know when they were last tested, and try to get it into the routine.

"I want to get back to a little sense of normalcy around here."