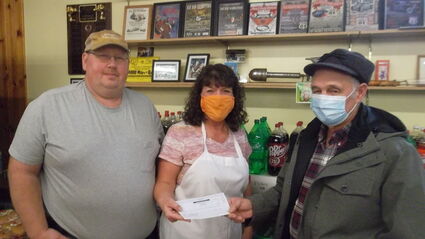 TJs County Corner owners Glenn and Renee Gaffney accept a $2,000 check from Carlton County commissioner Mark Thell. The money is part of CARES Act funding and will help cover part of the cost of their extra services to the area.

A hub in the Mahtowa community serving a large part of western Carlton County, TJ's Country Corner has the feel of the neighborhood grocery once common in American locales. But with the death of founding owner Tom Bislow two years ago, the patrons of the store and the Mahtowa neighborhood braced themselves for what the future would hold. Bislow's commitment to the local area, making the store a community hub, could change with new owners.

In this case, change brought more good. And during the pandemic, TJ's new owners, Glenn and Renee Gaffney, have demonstrated again and again their support of the communities that support them, through grocery and hot meal deliveries, and more. They have even turned their store into a site where people in need can fill out electronic paperwork for such necessities as applications for unemployment benefits and other social services.

On Saturday, the store was awarded a $2,000 CARES Act grant from the county to use for its past and current outreach efforts.

In the early days of the pandemic, the new store owners explored how their store could help out those in need. Renee said that they were "flying blind" initially, because people were not going to churches, schools or coffee shops.

"We had to depend on input for those that came to the store," Glenn said, "and the grapevine. This didn't cover all the information for those needing help in the area."

The success of their effort grew slowly, enlisting volunteers and donations. Working through groups such as the Mahtowa Fire Department and various veterans associations, local people started to call.

They started with grocery deliveries in the Mahtowa area, then expanded further afield because there was no one else to fill that need. Seeing people quarantined and other people housebound prompted TJ's to provide hot meals. The Gaffney's energy was infectious.

Last Thanksgiving, they prepared 260 turkey dinners (42 turkeys were cooked and sliced for the meals). People could buy their meals if they wished as a donation but the meals were partially funded by generous anonymous donations from the community. Many of the meals were curbside pickup, but runners drove meals out in the countryside, sometimes 10 meals in a car. Last fall an idea came up to help the elderly safely walk in their icy yards during this winter. Within a short time, donated sand, salt, and pails arrived in the back of the Gaffneys' store for assembly. The Mahtowa Fire Department helped mix donated salt and sand into 5-gallon buckets and distributed them to households to ward off slips and falls.

One thing that surprised the Gaffneys as they offered to help area individuals in need was the strong sense of pride in rugged, independent neighbors. When something free is passed out, the response quite often would be "No, give it to someone who really needs it," Renee said. Convincing them would take some time.

Financial help, given unsolicited from individuals, was fantastic, the Gaffneys said, and almost all donated anonymously. One individual gave $500.

The Gaffneys' warmth is evident in the feelings expressed by their employeess. Bo Moffet from Moose Lake works at the store and hopes to train as a butcher. When asked what he was helping to cook in the kitchen, he smiled and said "We're cooking cowboy beans today." Bo said he was proud of his work at the store. Within a half hour he brought out rice cereal bars with a smile and said he wanted to thank everyone for coming.

The Mahtowa store is a busy place and little spare time is left for the Gaffney family. Renee continues to work for Carlton County because her family needs the health insurance. Glenn also has a business that provides services for the local lake people. They said the income from the store could not support raising a family, which is a reality for many small businesses in the area.

The Gaffneys were surprised at the $2,000 grant and said it will cover a lot of needs in the community.

"Our effort so far has been possible only with the countless hours of help from many and the donations we have received," Renee said. "This has been a team effort. This grant will make a big difference for those in need in the community."

Commissioner Mark Thell presented the check to the Gaffneys. He said that the effort is not unique in the county but shows what people can do in tough times.