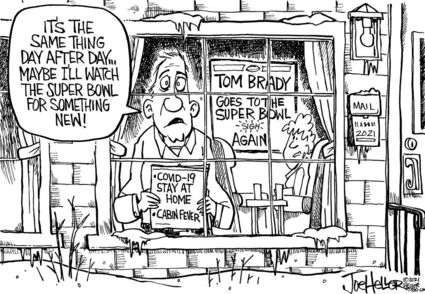 My son Patrick wrote a little poem a few years ago that went something like this: "If we practice an 'eye for an eye' pretty soon we'll all be blind." I had been trying to teach my boys about the concept of "turning the other cheek" and how sometimes "you have to go backward in order to go forward." It was pretty a successful lesson, but my goal was to get these two brothers, just a year apart in age, to stop squabbling so much. Did it work? I'm not sure yet.

Sibling rivalry is as old as Cain and Abel. My boys are the best of friends, but if one of them gets an ice cream cone, the other squeals like that cone was stolen from him. I should not be surprised: I have a brother a year older than me and I remember that sense of injustice. It's human nature, I guess.

So, it was predictable that our new president's calls for "unity" are met with derision and callous attacks from both sides. How can we expect unity when the other side tried to overthrow the government? Why would we unify with the other side who tried to steal the election? Conservatives whine that Democrats fought their president at every turn. Liberals complain that the last administration attacked Democrats like we were the enemy. Try to work with them now, after what they did? No way! They have to apologize! I won't unify unless they unify first.

Of course, that will get us nowhere. Which is why I also taught my boys that "sometimes you have to go backward to go forward."

I'm encouraged by some signs that our government will try to work together again, just like they did when America was truly great. Compromise is an asset, not a liability. So what happens when one side agrees to back down a bit, retreat a little, and allow the other side a minor victory? You can guess: the 'victory' is touted as strength and dominance and, as we know, to the victor goes the spoils. Once that happens, the other side agrees to never give in again, and we're right back where we started.

George W. Bush once famously said, after he was reelected, "I've earned political capital, and I intend to spend it." That was an unfortunate choice of words, I think. And those were the words that made the headlines, of course. But he also said, "The campaign is over. Americans expect bipartisanship and results."

I believe he meant it. I spent the better part of Bush's second term analyzing his administration's actions on "Harry's Gang" but even I agreed with the direction some of his policies took us. We can do that again in America. Someone just has to be willing to be gracious.

But both sides need to negotiate in good faith. That means we must practice bipartisanship. Put Country over Party. Represent all constituents, not just my party's. All the cliches. Don't be afraid to compromise. Don't be surprised when it doesn't happen.

It seems like the extremists on both sides get the most notice. Whoever can scream the loudest gets the most attention. Wouldn't it be nice if we could get past the righteous indignation? Can't a politician campaign to the voters: "I compromised on that extreme issue because it's best for all my constituents, Democrats, Republicans and independents?" Sure, the extremists will put up an extremist at the next election, but wouldn't it be nice if voters understand that compromise is a virtue?

So who's going to blink first? Who has the courage to say, "OK, let's try to unify." I hope we'll see some moderates in government, especially at the state level, starting the trend. Someone will bend a little, and get criticized by the extremes of his own party. But soon after, someone from the other side will do the same, and accept the same backlash from their side. After it happens a few times to each party, the voters will start to have a little respect for the true leaders. The true leaders, those looking out for all the people, will become admired. The extremists, those spilling hate and vengeance, those eager to cast division and derision at their opponents, will look petty and sleazy. Soon, true leaders will take their place. America will become great again, even though we'll still see plenty of politics. But it will be respectful.

All it takes is for one side to turn the other cheek, first.