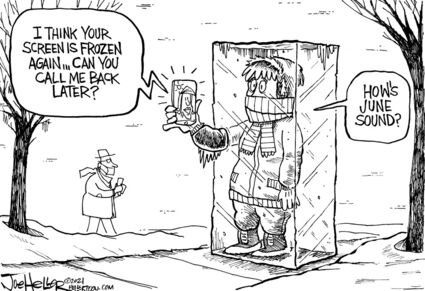 We're fortunate to have so many quality banking options here in town. Not only do we have a couple branches of some major banks, we also have plenty of smaller, local banks for most services.

It's not just banks. Credit unions have a long history in these parts, due in no small part to the influence the Finnish people have on our culture. Finns knew that if they pooled their resources, they could compete with the big banks and still have local control of their money. Credit unions were usually smaller, local operations, named after the group they primarily served: Cloquet Co-op Credit Union, Potlach Employees Credit Union, Minnesota Power Employee Credit Union.

When regulations changed, many credit unions changed names to show they accepted a wider reach of customers. The Co-op became Members Cooperative Credit Union, which is logical, and Potlach became Northwoods Credit Union. Others came up with names so odd that they had no logical relationship to the services they provided. Spire? Affinity? Centricity? I'm not even sure what those words mean.

I've always liked our local banks, too. State Bank of Tower and CornerStone Bank were the banks I first used when I got here. Peter McKinney, president of State Bank, once put me in a headlock when I mentioned I didn't have a checking account at his bank. Peter's a pretty reserved guy, so having him pull a wrestling move on me was particularly funny. I enjoyed discussing politics with Jeannine Nordin, Cornerstone's president for a long time, as she is very conservative and I am not so much so. That's part of the fun of local banks - many of us get to know our tellers, but it's in small towns that the average customer can hobnob with the bank president.

Then there's Woodlands Bank, owned by the Mille Lacs Band of Ojibwe, squeezed into a tiny lot on North Road by Minnesota Highway 33. They focus on serving band members, although they welcome any customer. They are probably the newest bank in Cloquet. At a time when many banks are consolidating into mega banks that are too big to fail, it's refreshing to see local banks still have a presence in town.

And those time and temperature signs outside many banks? It's one of their most valuable services. How would we know what time it is, or how cold it is, if it weren't for our banks?

Over the years, banking has changed a lot. For my first bank account, the deposits and withdrawals were recorded by hand, in a little book. I was afraid if I lost that book, I'd lose all my money. Turns out the bank kept a record of it, too, which never occurred to my 9-year-old mind. Soon, computers took over and banking became more automatic. You can bank from home, online, and even from your phone.

New banks are no longer built with huge lobbies because most people use the drive-thru. Sometimes the line of cars is crazy. Just drive past Members on a Thursday afternoon and see all the cars lined up on the frontage road. Covid or not, most people bank from their cars rather than go inside. It's so much more convenient.

The hours of operation are still oddly unfriendly, though, at most banks. Many open at 8 or 9 a.m. and close by 5. US Bank's lobby is closed, and their drive-thru closes at 4 p.m. Just like the old days, if you need to get banking done, you have to take off part of your day to do so. Before computers, banks closed their counters at 3 p.m. In the modern world, 5 p.m. isn't much better.

Small things. We are lucky to have so many trustworthy banking options around here.