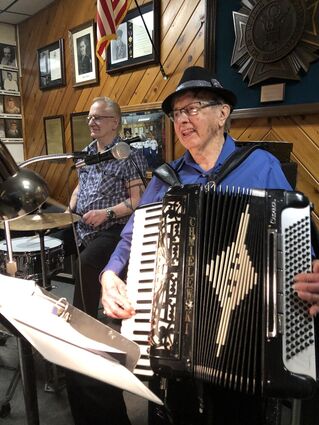 Florian Chmielewski celebrated his 94th birthday Wednesday at the VFW in Cloquet. He played, of course, because it's just what he does, he said. Terry Stolquist was on drums.

When Florian Chmielewski carries his accordion into the VFW in Cloquet, he can't help but smile.

"I told someone that I have been doing that for 76 years, bringing my accordion into a place and setting the case down," he said. "I have to do it. I am there to make people happy. I bring joy to their lives."

"Someone asked me who was going to play for me on my birthday," Florian said. "I told that person that I would play for my birthday, just like I did for our wedding."

"Four generations of Chmielewski orchestras have been bringing music and fun to our community for over a century," Florian said in a 1976 newspaper article.

Frank Chmielewski, Florian's great-grandfather, came from Poland and was one of the first settlers in Pine County in the 1800s. He was a well-known fiddle player. Frank's son, Tony, was a member of the Chmielewski Brothers Orchestra in the early 1900s and played with his brothers, Nick, Dennis and John.

"This early orchestra walked to their dance engagements, carrying their instruments on their back," Florian wrote in a personal history book. "In later years they traveled by horse and buggy, entertaining several nights a week."

Six of Tony and Tillie's 15 children became musicians. In 1955, Chester, Florian, Robert, Leonard, Donnie and Jerry performed their first live telecast for WDSM-TV in Superior, Wisconsin. By 1970, the show was syndicated for expansion into Canada and other markets in the United States.

"My sister, Bernice, is 96 and lives in St. Paul. Jerry played drums for me, but he died a year ago."

Florian, his wife, Pat, and their four children lived near Sturgeon Lake. He still owns his parents' farm but has his own home nearby. His wife, Pat, died in 2003, a day after their 47th wedding anniversary.

The family music tradition has continued through their children: Florian Jr., Jeff, Mark and Patty. And on to their grandchildren and great-grandchildren.

"Junior can replace me," Florian said. "Patty's three kids are good musicians and can play drums, trumpet and accordion. Granddaughter Katie plays the trumpet and the drums."

It isn't only the talent in music that the Chmielewskis are noted for - it is politics as well.

Frank Chmielewski served on the first board of Pine County commissioners. His son, Tony, served on the Sturgeon Lake Township board and was an area fire warden for 35 years.

Florian served in the Minnesota Senate for 26 years. During his years in St. Paul, he worked on legislation to bring about key projects in the area. He was known as the "Singing Senator."

"Freshman senator stages polka protest at Capitol," read a newspaper headline, the story telling how Chmielewski brought out his accordion and did a special rendition of the song "Please Release Me, Let Me Go," as a special session droned on.

In the 1970s, the Chmielewski Funtime band consisted of Florian, Florian Jr., Jeff, Mark and Patty. The band performed across the United States and Canada and traveled to Germany, Switzerland, Norway, Hawaii and Mexico.

Florian once operated a tour company, where fans could go on bus tours all over the country. That company has been taken over by his daughter, Patty, and her husband, Michael Bell, under the name ChmieBell Tours.

Florian produced more than 2,000 TV shows. The old reels have been converted and will soon be shown on Fox 21 in Duluth.

"They will be showing those old Chmielewski Funtime shows on Saturday and Sunday mornings on Channel 21 at 11 a.m.," Florian said. Details have yet to emerge. There are two seasons of the Funtime Polka Party that run on Pioneer Public television and shows can be found on YouTube online.

Florian has won numerous awards during his career. In the mid-1990s, he was inducted into the Minnesota Music Hall of Fame in New Ulm and the Ironworld USA Hall of Fame in Chisholm. In 2013, he was awarded an honorary doctorate in law and music after a commencement address at the Fond du Lac Tribal and Community College in Cloquet. He received the Pioneer Award from the International Polka Association in 2014. 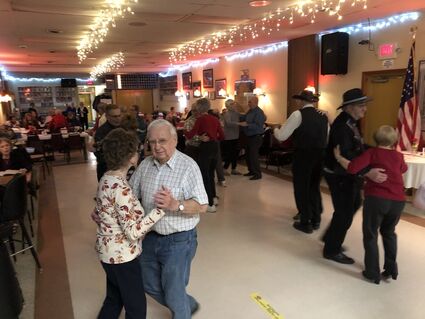 Couples dance to favorite tunes played by Florian Chmielewski and his brother-in-law and drummer Terry Stolquist Wednesday at the Cloquet VFW.

Friend and fellow accordionist Lorren Lindevig asked Florian to play at the VFW with him the first and third Wednesdays of the month 33 years ago, Florian said.

"Lorren is gone, but I'm still there 33 years later," he said. "My daughter Patty has lined up performances for me in Maple Grove, St. Paul, Cambridge and Rush City."

"I don't play circle three-steps or schottisches," he said. Dancing is restricted to partners only and distance has to be kept from the band. "There are cones on the floor in front so the audience can't come up to the stage. I don't explain things, people just know what has to be done."

Florian has no plans to retire.