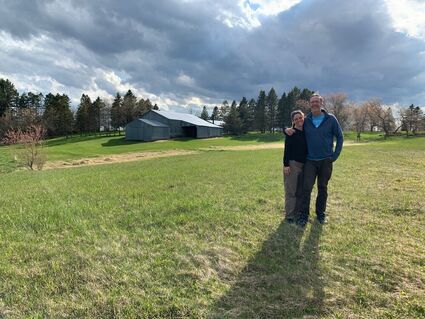 Heather-Marie Bloom and John Hatcher purchased the Johnson family farm near Barnum last year after a search that became public after Hatcher wrote about the couple's effort to find land in Carlton County. Bloom runs Rising Phoenix Community Farm, a community-supported agriculture business that sells weekly shares of produce to members. Before buying the farm, Bloom had to lease land to farm and move her portable tiny house to different locations.

In June of 2020, we turned off County Road 6, just east of Barnum, and onto the gravel driveway at the Johnson family farm. It may be our new home, but it will always be the Johnson farm.

We had just come from Moose Lake, where we had signed the closing papers. Ed Johnson had handed us several large sets of keys. We still aren't sure what some of those keys open.

We parked, got out of the car and started to walk. Nothing needed to be said. My fiancé, Heather-Marie Bloom, and I knew where we were going.

Our destination was a grassy spot underneath a stand of box elder trees at the edge of a field. We sat down in the grass. We snapped a few pictures. It was a warm, June day. A light breeze was blowing. The sky was a collage of early summer blue with low, billowing clouds. Looking east, we saw rain fall from darker clouds like a bridal veil.

The grassy spot where we sat had been the family's garden plot. Ruth Johnson, the last member of the family to live at the farm, had tended to the garden with help from her mother-in-law, Edna, and the rest of the family. They grew a variety of vegetables that they'd eat fresh in the summer and preserve and store for winter.

Directly in front of where we sat, the land gently slopes away before rising up again to another small knob that is the highest spot on the property. This was where Ed Johnson, Ruth's husband for 63 years, had enjoyed walking with his daughter Sharon in the evenings, so they could have good views of the sunset. Later in life, when walking the distance became too much, he'd make the journey in a golf cart.

On the east side of this hill, water flows on a meandering journey toward Lake Superior. On the west side, the water makes its way through lakes and rivers, eventually joining the Mississippi.

We couldn't help but wonder what this open, rolling landscape must have looked like before the Johnson family, before it was logged, before the railroad and before the Treaty of 1854 with the Ojibwe. We tried to imagine the ancient forests of towering white pine and the home to the Fond du Lac Band of Lake Superior Chippewa.

The first day we visited the farm, Ed Johnson took us on a walk around the mile-long perimeter, talking about the land and the farm's history.

We told him our story as well.

Rising Phoenix Community Farm is the name of the business that Heather-Marie started in 2011. She had been what she called a "landless farmer." She would lease space to farm and move a tiny house that she and her father built to the property where she would grow vegetables for the members of her community-supported agriculture business.

After moving her business and her farm five times in 10 years, we decided in 2019 that it was time to to look for land of our own.

Ed told us that he and his sisters, Susan DaPra and Sharon Riemer, had decided it was finally time to sell the family farm after their mother, Ruth, died in 2018.

At the end of the visit, we thanked Ed and said we were looking at some other properties as well, but that we'd get back to him.

He paused for a moment and then said, softly, "I think you'd be real happy here."

It had not always been an easy life, but for 114 years and four generations, Ed Johnson's family had been happy on this land.

The first member of the Johnson family to settle on this 40-acre parcel of land was not named Johnson. It was Simpson.

Edward and Abigail Simpson came to northern Minnesota from Ontario, Canada in the late 1800s. Their daughter, Edna, was born in 1899 in Gary New Duluth, where the family lived for a short time before moving down to Barnum.

In 1906, the Simpson family moved onto this land as homesteaders.

Edna Simpson would spend the rest of her life on the farm. In 1921, she married a man named Carl Johnson from Cloquet, who would join the family at the farm. The couple would go on to have two children, Edward, and Ethel - who lived for only 22 months before dying of septic poisoning.

After just five years of marriage, Carl died in 1926 after a year-long battle with tuberculosis and diabetes. Now in her late 20s, Edna and her 4-year-old son, Edward, were left to live on the farm with her parents.

Edward grew up working on the farm, helping his namesake grandfather, who had cleared the land in the early 1900s using a team of horses and black powder for blasting.

"On the farm lived cattle, horses, chickens, pigs - typical of all self-sustaining farms," wrote the younger Ed in a brief timeline documenting the history of the farm. "Crops included hay, corn and small grains such as oats."

They also raised Guernsey cattle and were involved with the Barnum Breeders Association, Ed wrote.

Edward Simpson died in September of 1943. Abigail would die later that same year. They were both 82.

Now it was just Edna and Edward on the farm. Edward was in his early 20s. In 1949, he married Ruth Johnson - same last name, but no relation. When they had their first daughter, Susan, and then their son, Ed, they began construction on a larger home next to the one they were living in. They built it themselves in the evenings after Ed got home from work and the chores were done. The home was finished in 1954.

For the next 30 years, there would be three generations of the Johnson family living at the farm, and they all played a role in daily life there. The kitchen was Edna's domain, though she also did childcare both at home and for others in the community. For a time, she also walked 2 miles into Barnum, where she worked at a restaurant.

Edward Johnson had numerous jobs off the farm to bring in extra income, including being head custodian for the schools in Barnum.

Ruth had worked for the Barnum Creamery before they were married, but now the duties of the farm and of milking the farm's dairy cows were her main responsibilities.

The 1960s and 1970s were probably the most profitable times for the family farm, the younger Ed Johnson told me. The dairy cows were productive and brought in a fair amount of income, and there were three generations of Johnsons to help out with all the work that needed to be done.

This farm was not unlike many in the region. They were small and family-owned and gave people an income and a way of life, though it had to be supplemented with income from jobs off the farm.

Things began to change in the 1980s as local banks began to fold and many of the smaller farms began to go out of business, Ed told me. It wasn't uncommon, he said, to have an auction at one farm or another nearly every week.

First the creamery in Barnum closed, and then the Moose Lake creamery closed in 1976.

Eventually, the Johnsons switched from dairy to beef cattle. 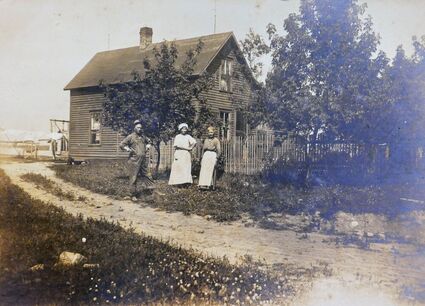 Ed and Abigail Simpson with their daughter Edna, center, pose in front of their farmhouse in about 1915. The family moved to the 40-acre farm just east of Barnum in 1906 and the homesteaders would spend the rest of their lives there.

Edward Johnson died in 2013. Ruth would live in the home by herself until she moved to an assisted living facility. She died in 2018.

Susan DaPra told me that she thinks her mother and grandmother would be very pleased to know the Johnson family farm would soon be busy with activity from a new generation of farmers.

Heather-Marie and I eventually walked back to the house, unlocked the door and walked inside.

On the kitchen table we found a basket of fruit and, leaning against it, a picture. It was the entire Johnson family, taken in the living room of the home when Edward and Ruth were still alive.

At the bottom of the photo was a note: "Welcome to your farm. The Johnson family."