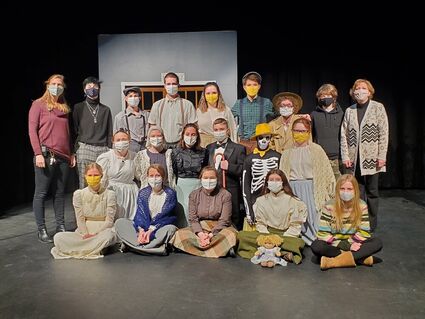 As with every other sport and activity during the pandemic, Covid-19 brought changes to the one-act play competitions this year. Actors, crew and directors wore masks during rehearsals and performances, and the competition was virtual this year, meaning schools had to submit a video of their performance for judging rather than traveling and doing the show live at the section and subsection competitions.

“Lafayette No. 1,” a play set during a yellow fever epidemic.

Here’s how Bergstedt described it: The play is set in New Orleans in 1816 during a yellow fever epidemic. Many young people were left orphaned (also known as “the Forgotten”) as a consequence of the epidemic. Lizzie Landry brings bread from her mother’s kind employer to the band of homeless youths she has befriended. Local police and politicians consider them a nuisance to the city and order them to relocate. After the loss of her mother to the yellow fever, Lizzie finds her own fate entangled with those of the Forgotten. They band together to seek help from the city leaders.