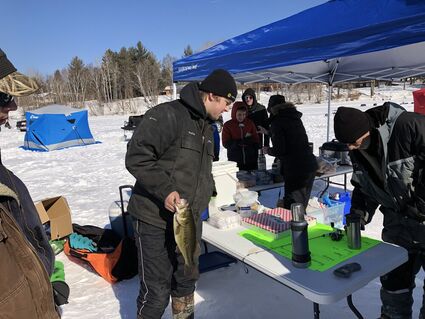 Payton Koskela brings a bass he caught for weighing. The 2.64-pound fish turned out to be the largest fish caught during Saturday's Kingdom Builders Ministries Fishing Derby.

Not everyone was catching fish during Saturday's Kingdom Builders Ministries Fishing Derby, but with blue skies, sunshine and temperatures above 20 degrees at last, who cared?

Not Cloquet's Steve Hamlin, who'd been sitting next to a hole in the ice at Chub Lake for more than two hours without a nibble. And not brothers Mike and Gabe Dusek, who were tucked in a nearby tent, gazing through a large Christmas-tree-shaped hole in the ice to the bottom of the lake.

"We're just here to goof off and have fun," said one of the brothers, adding that it was "like sitting in an aquarium," looking down into the water at the lake bottom covered with greenery. "We don't even need a heater in here."

It was a glorious day to be out on the ice, coming hot on the heels of a cold snap that saw temperatures at or below zero for nearly 12 days in a row. Clusters of tents and trucks dotted the lake. A road plowed on the ice led out to the largest grouping - which surrounded the concessions and prize tables, protected only by a canopy - while smaller pathways led to other groups of ice fishermen and -women either inside or braving the elements on an overturned bucket or lawn chair.

Bruce Matuszak and Lee Harris, who helped organize the fifth annual event, estimated they had between 70 and 100 people fishing, "by far" their largest ice fishing tournament yet. A fundraiser for Kingdom Builders Ministries, the money raised helps pay for other KBM efforts, including the Wood City Christian music festival.

"When we do fundraisers, we like to have fun and this is one of our funnest events," Matuszak said, as a successful fisherman walked over, holding a bass in his hand.

That would be Payton Koskela and his 2.64-pound bass turned out to be the biggest catch of the day, netting Koskela the grand prize: his own pop-up ice fishing tent. The list of fish was still pretty small with just nine fish caught in the first two hours Saturday. Koskela's fishing buddy, Harlan Foster, snagged a sunfish that morning. 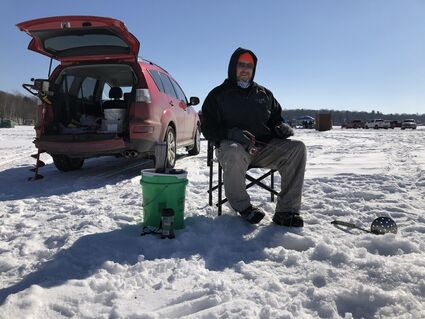 Cloquet's Steve Hamlin figured he wasn't busy, so he borrowed equipment from his father-in-law and came out to fish at the Kingdom Builders Ministries ice fishing tournament on Chub Lake Saturday.

Foster said he fishes all over, from Duluth to Moose Lake and Cromwell, but not often at Chub Lake. He and Koskela had met three other friends for the tournament and eventually set up close to "the point," where some fish were actually biting.

It was a good day for it, Foster said. "I work construction, so winter is my free time and I can actually enjoy it," he said.

A little ways down the ice road, Hamlin was still patiently jiggling his minnow in the ice cold water, enjoying Mother Nature, even in the snow and with a cold breeze picking up.

"This is my first time out this year," he said, declaring that it wasn't about winning. Still, it would be nice to catch something.

"I'd be happy with a little perch or a sunny, anything," he said.