Lands: Past is prologue in new farm formation 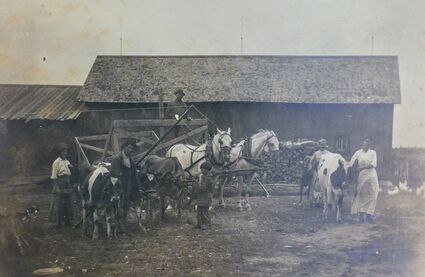 Ed and Abigail Simpson moved to Ontario, Canada in the late 1800s and homesteaded their farm just east of Barnum in 1906. Their descendants, the Johnson family, believe this photograph was taken around 1915, though they are not sure who else is in the picture.

With our farm's first growing season fast approaching, a century-old picture on the living room wall inspires us.

The image is cloudy and faded at the edges. The faces of the people are blurry. We don't know a lot about the photo except that it's from about 1915 and that two of the people are Ed and Abigail Simpson, who first homesteaded the farm in 1906.

The image shows a family and all of their livestock: A team of tall, white horses; five cows and a flock of chickens pecking away in the background.

When we were first handed this image by the farm's descendants, my fiancee, Heather-Marie Bloom, and I both thought the same thing: We wished we could have a conversation with these people.

We tried to envision how that would go.

We'd tell them that Heather-Marie first started farming a decade ago, leasing land, before we finally purchased this farm just east of Barnum - their farm - after placing an advertisement in the newspaper that was read by their descendants, the Johnson family.

We would explain that Heather-Marie's farm, called Rising Phoenix Community Farm, uses techniques that reject the large-scale, highly mechanized approaches that have dominated modern agriculture for the past 50 years.

She also doesn't have a tractor and doesn't plan on getting one. She will not use any chemically derived pesticides or fertilizers.

And, we'd explain, she sells her vegetables through a "community supported agriculture" (CSA): a small group of customers sign up and pay her at the start of the season. In return, she agrees to deliver a weekly box of vegetables over the 17-week growing season.

What do you think, Ed and Abigail?

Perhaps their response would be similar to one she heard from family and friends when she first told them of this dream more than a decade ago: Why would you want to do that?

In fact, the model of Rising Phoenix Community Farm is not unique. In Carlton County - as is the case across the United States - a new wave of agriculture is combining old approaches and new innovation to farm on a smaller scale, selling directly to customers.

In 1906, when Ed and Abigail Simpson moved onto this land, they faced the daunting task of transforming a once-forested landscape into farmland. Where there had been a virgin forest of white pines, there were now rolling hills covered with tree stumps and rocks.

The only tools at their disposal were a team of horses, a plow and black powder. The remnants of their work are still visible on the eastern edge of the now-cleared fields where piles of moss- and lichen-covered rocks lie.

Ed Johnson, the great-grandson of Ed and Abigail, said tractors were not used on the farm until sometime in the 1940s. Johnson said no chemical fertilizers were ever used on the farm. They relied on their livestock's manure to keep the soil fertile.

For CSA farmers in this region, March is a busy time of year. Some are still taking registrations from prospective members, though many are nearing full capacity.

The seeds have been ordered. Greenhouses are heating up and seeds will soon begin to germinate as they are coaxed to life.

For Heather-Marie, this year will be different. After 10 years of leasing land she is planting seeds on her own farm.

Rising Phoenix uses farming techniques that most likely aren't too different from what Ed and Abigail did on this same land.

We limit the use of tractors and focus not just on growing vegetables, but on growing our soil. We will feed it a balanced diet of compost, manure and other amendments in hopes it feeds us and our customers for years to come.

But growing vegetables is only part of the job. There is a reason Heather-Marie has the word "community" in the name of her farm. For her, the idea is to do more than run a business; it's to connect people to their food, to their farmer and to one another.

In the past 10 years, Heather-Marie has developed an intimate relationship with her customers. Many of her members have been with her from the first year. Rising Phoenix is one of the few CSAs in this region that offers a discount if members work a set number of hours on the farm.

Last summer, we invited longtime farmer David Abazs out to walk the land with us. David and his wife, Lise, moved to northern Minnesota in 1988 and started homesteading on 40 acres near Finland and named it Round River Farm, one of the first organic CSA farms in this region.

Abazs told me recently that the most innovative and successful farms draw on both old and new ways of farming.

"Think about the fact that everything grown before the 1940s was organic," said Abazs, who is also executive director of the University of Minnesota Extension Northeast Regional Sustainable Development Partnership.

The farms were small, they had livestock, and they used local labor. They also rotated crops and fertilized with manure.

But modern farms also have the opportunity to experiment with new innovative techniques, including soil testing, solar energy and equipment that cultivates crops without damaging the soil.

"New farms need to make decisions about ways to innovate," he said. "The farms of the future are farms that are going to consider all these aspects."

Abazs said one of the greatest challenges facing today's small farms is a global food system that gives consumers tomatoes in winter (never mind how they taste), and food that is far cheaper than an organic farmer can afford to sell it for.

The success of CSAs in this region suggests consumers may be willing to pay a little more for food grown for them by a farmer who is also their neighbor.

In 2017, Carlton County had 529 farms with a median size of 127 acres producing agricultural products that earned an average of $27,766 per farm, according to the U.S. Department of Agriculture farm census. That's up slightly from 2012 when 501 farms reported earning an average of $21,877.

Rising Phoenix is one of a dozen CSAs in this region that belong to the CSA Guild. Collectively, these farms in northern Minnesota and Wisconsin have more than 800 members who sign up to receive weekly deliveries of vegetables during the summer. Those farms range in size from small ones like Rising Phoenix and Stone's Throw Farm in Wrenshall to larger operations like Northern Harvest Farm and Food Farm, also in Wrenshall, that have hundreds of CSA members and provide food to their customers for much of the year.

Last year, most of those farms had waiting lists of people hoping to join. This year, the trend is heading in the same direction and many farmers believe the pandemic has people rethinking where their food is coming from.

One night as the sun set and the frigid, subzero wind blew, we put on a few layers and walked out across the crusty snow toward the field, hidden beneath a foot of crusty snow. 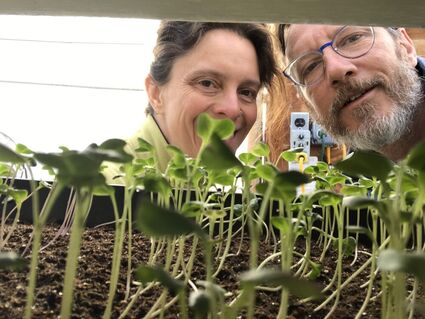 Heather-Marie Bloom, left, founded Rising Phoenix Community Farm about a decade ago after working as an environmental educator and artist. This year, she will start seeds in her greenhouse and plant them in a farm that she owns with her fiance, John Hatcher, right.

CSA membership signup had begun and it all suddenly began to feel real.

The way a CSA works is that people sign up and pay in advance. On the registration form, they check a box that certifies they know this arrangement is a "shared risk."

That means we could do everything right and it could still all go wrong. Too much rain. Too little rain. Pests, disasters. The possibilities are endless.

We stared out across the field quietly wishing that Ed and Abigail were here to give us a little advice. Or, if nothing else, at least a little encouragement.

Read the first installment of this story at https://www.pineknotnews.com/story/2021/02/19/news/we-share-in-calling-this-place-our-home/4758.html