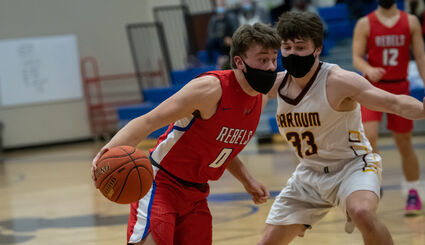 Logan Orvedahl drives against Barnum's Maxwell Moors last Friday in Moose Lake as the Rebels got by the Bombers.

Going into Friday night's game against Barnum, the Moose Lake/Willow River boys basketball team was averaging almost 90 points per game. While the Bombers were able to hold the Rebels to 29 points under their season average, the Rebels still pulled away to a 20-point, 61-41 win at home.

"Our shooting percentage and points per possession were actually pretty close to our season average," said Rebels coach Wes Cummins. "I think Barnum did a great job slowing the game down and limiting our possessions."

The Rebels also got into a bit of early foul trouble as both Mason Olson and Brady Watrin spent more time on the bench than either of them is used to.

"Our players did a good job of team defense against a talented scoring team," said Barnum coach Rich Newman. "They got in a little foul trouble, and we tried to limit their good looks at the basket and prevent them from getting to the rim."

The Rebels doubled up the score on the Bombers 26-13 at halftime, but Barnum responded early in the second half with a run that cut the gap to five points.

"We couldn't hold on," said Newman. "We did a good job for the most part but they made a run halfway through the second half to get the 20-point spread."

Despite the foul trouble, both Olson and Watrin both bounced back to lead the Rebels in scoring with 16 and 14 points, respectively. The Rebels also held the Bombers to just 41 points for the game - a point that didn't go unnoticed by Cummins.

"Defense has been our focus all year," said Cummins. "We know that we can score enough points to win a section, but we need to become better defenders if we want to win a big playoff game."

The second half saw the game speed up as the Rebels outscored the Bombers 35-28.

Leading Barnum in scoring was Jake Hultgren with 15 points.

"Jake Hultgren is a returning starter from last year, and is a solid player for us who does a great job distributing the basketball," said Newman. "We have been emphasizing that this year he needs to look to score more instead of pass."

Joining Olson and Watrin in double-digit scoring for the Rebels was Phillip Sheetz with 12 points. Also scoring for ML/WR were Duane Broughton (2), Landin Kurhajetz (9) and Carter Johnson (8).

Hultgren was joined in the scoring column by Reed Kornovich (6), Joe Peterson and Willie Richardson (8), and Hayden Charboneau and Matthew Berry with two points each.

On Tuesday night last week the Rebels suffered their first loss of the season when they dropped an 87-84 overtime decision to Pequot Lakes on the road.

"First, they are a good team," said Cummins. "I think our boys walked away from that game with a couple realizations: that we can play with the best teams in our section, but we need to improve in certain areas if we expect to win those games when it matters."

Prior to the loss at Pequot Lakes, the Rebels had reeled off eight straight victories.

"We have the luxury of having two very nice players in Mason Olson and Brady Watrin," said Cummins. "Our success this year can also be attributed to our other guys. We can play ten guys, any of which can score 20-plus points on any given night."

Barnum's loss to Moose Lake/Willow River came after four straight wins over Cook County, Silver Bay, Carlton and Cromwell-Wright as the Bombers have started to find the right formula for consistency. 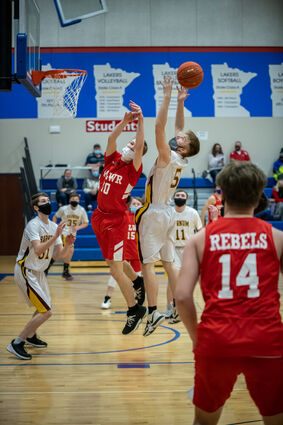 "We got off to a slow start at the beginning of the game against Moose Lake/Willow River and got down by 15 points. That has been a problem for us all year and we have to claw our way back into the game," said Newman. "I feel our team took some needed steps forward last Friday, especially with our defense. We have a great group of players here and the next couple weeks will tell us where we will be going into the tournaments."

On Monday, the Rebels returned to their high-scoring ways by knocking off Proctor 105-62 as Olson and Watrin scored 22 and 20 points.

The Bombers had a far different result Monday as they fell 45-34 at home against East Central.

Moose Lake-Willow River stayed hot on Tuesday with an 88-47 win over Virginia. The Rebels are now 11-1. The Bombers are 6-5.