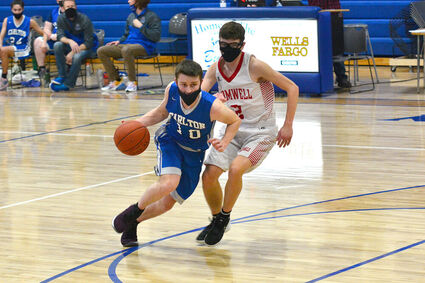 Carlton's Spencer Rousseau makes a drive to the net around Cromwell-Wright defender Noah Foster as the Bulldogs take on the Cardinals in Carlton Friday night.

Two teams that were undefeated in Polar League play met up in Carlton on Friday night and it was a battle between the Carlton and Cromwell-Wright boys basketball teams. It took extra time, but eventually the visiting Cardinals were able to pull out a 56-51 overtime win.

"We played well but shot poorly, which has been the story of our season lately," said Cards coach Bill Pocernich. "We shot 14 for 30 from the free throw line, 2 for 13 from the 3-point line. Despite that, I felt that we defended well and scored well in the paint to make up for our perimeter shooting deficiencies."

Leading Cromwell-Wright were Nathan Eliason and Ethan Shelton, who finished with 21 and 19 points respectively. Noah Foster was also in double-digit scoring with 13 points.

The first half saw the Cardinals pull out to a 24-19 lead, but the second half saw the Bulldogs fight back, outscoring Cromwell-Wright 29-24 to send the game to overtime.

"We played better defense in the second half," said Filipiak. "We had a full bench and we have four ninth-graders who came in and gave us solid games on both ends of the court."

Double-digit scorers for the Bulldogs were Spencer Rousseau with 13 points, and Luukas Korpela had 10 points.

"This was an important game in our conference race, as both Carlton and us came into the game undefeated in conference play," said Pocernich. "We only play each other once this year, so this in effect was a two-point game. So, it was a big conference road win despite having a difficult night shooting. There were a lot of positives for our young team to take from this."

Also scoring for Cromwell-Wright were Emmett Clark with two points, and Michael Zoeller had a point.

For the season, the Cardinals are now 6-4.

"We have seen continual improvement throughout the year in all areas. It has been a lot of fun to see the improvements made from the beginning of this season to current," Pocernich said. 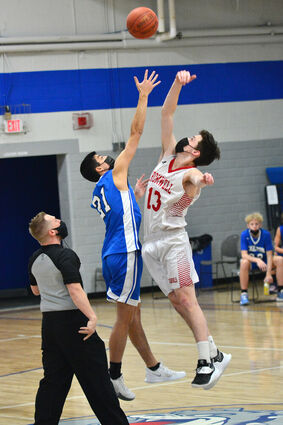 Carlton's Trevor Ojibway and Cromwell-Wright's Nathan Eliason reach for the opening tip off to start Friday night's matchup between the Bulldogs and the Cardinals in Carlton.

The loss dropped the Bulldogs to 5-5 on the season, but not for long. On Tuesday, Carlton downed Cook County 45-24, making their record 6-5.

"It's a season that has seen a lot of peaks and valleys," Filipiak said. "It is tough to get into a rhythm. You play a couple of really good teams and then you turn around and play teams that are struggling, so it is hard to be consistent."

Despite the pandemic, both coaches said their teams have been fairly healthy this season.

"We haven't had a player miss two weeks or 10 days to Covid concerns, so that's been a positive for us," said Filipiak.

Pocernich said the same. "We've been very healthy this season."

In this odd season of Covid-19, perhaps the teams that stay the healthiest will be the teams that will make the longest playoff run. If that is the case, both teams have a shot at advancing through the early rounds of the sectional tournaments.