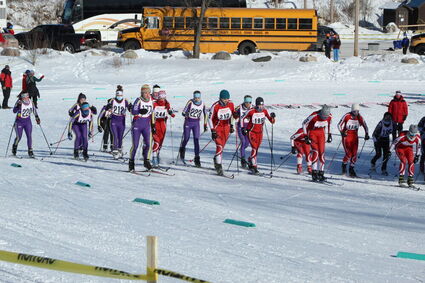 Members of the CEC girls varsity team take off against Ely skiers in a mass start earlier this season at Ely's Hidden Valley.

The Nordic ski season has been anything but normal for Section 7 ski teams this year.

Some of it couldn't be avoided: to start with, the season was delayed by more than a month because of a spike in Covid numbers and the resulting distance learning requirement. Once it began, meets - which usually feature at least six to eight teams - were limited to three. For the first race, skiers had to wear face masks, but fortunately officials soon came to their senses. During the cold snap, races were canceled across the Northland.

And then there was the intentional decision by Section 7 coaches to mix it up a bit. Instead of the usual simple offerings of either a 5K classic or skate race, they offered a mass start in Ely featuring a pursuit style race (with both kinds of skiing) and Cloquet held a relay race for boys and girls varsity skiers earlier this month. Distances varied as well, with the first race planned as a 10K at Spirit Mountain, until conditions shrank the course to 6.2K.

CEC head coach Arne Maijala said he's been meeting online with other section coaches weekly. "One of our main goals was to provide some different formats for the kids to make it a little more fun, because this whole environment [during the pandemic] has not always been so fun for everyone."

On Tuesday, CEC skiers traveled to Duluth's Snowflake Nordic Center to face Duluth East and Ely - two of the toughest teams in the section - for a race that featured a 3.5K classic and 4.5K skate race in the warmest conditions of the season so far.

With varsity, junior varsity and junior high races for boys and girls, it made for a long day, but Maijala was pleased with the efforts of all 65 skiers.

The meet was particularly important for the Lumberjacks varsity skiers, who head to the section meet at Giants Ridge on Wednesday, March 3.

Last year the CEC boys varsity team placed second to Ely at the Section 7 meet, which meant the Lumberjacks sent a Nordic team to the state meet for the first time in nearly 30 years. This year it looks like East is the team to beat. On Tuesday East finished with a team score of 382, CEC with 374 and Ely with 373.

Individually, Ely's Jasper Johnston has been finishing first whenever he has faced the Lumberjacks this year, but CEC has a deeper team than Ely and Lumberjacks top skier Benjamin Bauer finished only 22 seconds behind Johnston on Tuesday. Other top finishers for CEC included Josh Sanders in seventh, Cale Prosen in ninth, Miles Fischer in 12th, Henry Slater in 16th, AJ Maijala in 18th and Jordan Chopskie in 19th.

Conditions deteriorated some from the boys varsity races - which started at 11 a.m. and 12:30 p.m. - to the girls' races, which followed the boys' and took place during even warmer temperatures, well above freezing.

Maijala praised the waxing efforts of assistant coach Tim Stark and volunteer coach Ben Croft. "Those two guys are awesome," he said. "It's been tough this year because we've hosted three meets, so you have to focus more on getting things organized and running smoothly. It's been refreshing today to have them be able to focus more on our own kids and getting the wax just right." 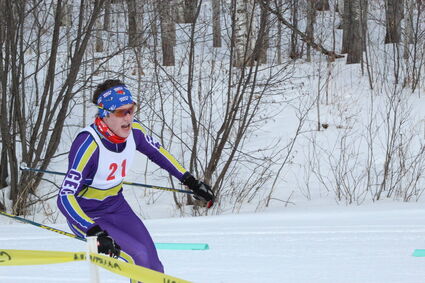 He also gave kudos to the many parents and other volunteers who stepped up when Cloquet had to host three meets this year. "That is so important," he said.

The CEC coaches got some good news on the bus ride home from the meet, when they learned that MSHSL officials decided that the top two teams and top six individual finishers (not on the selected teams) from each section could advance to the state meet, set for March 11 for girls and March 12 for boys.

That was a welcome change from the original announcement that only one team could advance from each section and four individuals, Maijala said.

"What's really frustrating is our boys and East are both ranked in the Top 10 in the state of Minnesota, and to only have one team advance would be really tough," Maijala said.

The section meet will be different because of Covid precautions, but at least the numbers are the same, and CEC skiers have at least one more chance to shine as a team and individually.