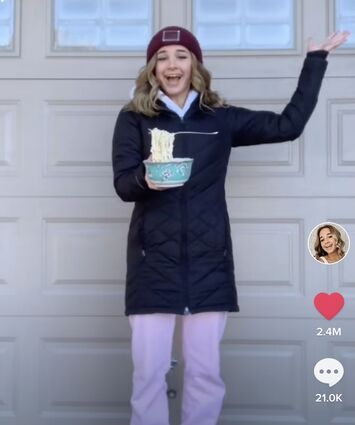 Move over Jessica Lange, Jamie Langenbrunner and Sappi fine paper - Cloquet has a new export. Her name is Emerson Rock and she's a TikTok star. A recent post by Rock about "what negative 25 degrees in Minnesota can do'' went viral on the social media video app and got more than 11 million views last month.

In the video, a smiling Emerson shows the world what happens to a cracked egg, cooked ramen noodles and boiling water in temperatures that low.

Rock said her video was a response to a dare from a follower during last month's cold snap. "I had been dancing inside for a while because of the cold temperatures, and they requested to see one outside. I used their dare as a video reply to show off how cold it really was outside," she said.

Originally a lip syncing app known as Musical.ly, TikTok is immensely popular with teens and tweens and still features a lot of music-related videos. It's the same video app that former president Donald Trump threatened to shut down last year, citing fears that its Chinese owners would use it to spy on American citizens.

Rock said she started her TikTok account (@emersonrock) a few years ago for fun, but during quarantine she started doing more.

"I consistently posted videos of myself dancing in my driveway in front of my garage door. It was a way to get outside and burn off some energy since club volleyball was canceled and distance learning was in place," said Rock, a Cloquet High School junior who is the setter for the varsity volleyball team. She's also an excellent student who regularly makes the A honor roll and is a member of the National Honor Society and a Link Crew Leader.

The recent cold-weather video is a little different from Rock's usual TikTok videos, which more often feature her doing dance moves. She radiates energy and happiness in many of the videos, and she's an excellent dancer - picture more bouncy and fluid than dark and dramatic.

Rock said she loves the idea of "spreading positivity and connecting with other people."

Eleven million connected with the unusual things that can happen when it gets to minus 25 degrees in Minnesota. At last count, 2.5 million of those people "liked" her video on the social media app.

Even Cloquet grad Luke Heine - co-creator of the Duet social media app for TikTok creators - saw Rock's cold weather video. When he saw it, he figured she might be from northern Minnesota ... then realized she was from Cloquet. "Woahhh .... She's up there with those L.A. kids," Heine said, comparing Rock's 750,000 followers to other popular creators on TikTok.

The numbers haven't gone to Rock's head, as the Cloquet High School junior said TikTok is just something she does in her spare time. "As a student-athlete, I fit it around my school day, homework, and volleyball," she said, adding that it was a big year for her volleyball too, as she made first team all-conference.

The daughter of Christina and Jeff Rock and big sister to Rowan, Emerson said she's always enjoyed creating content, whether it be taking pictures, making YouTube videos or presentations for class. "So when TikTok came out, it was just another place to be creative."

Rock said people have told her they like the dances and the energy she gives off.

"They said it gave them a reason to smile and was helping them get through quarantine. The term "good vibes" was constantly being used to describe my account," she said.

To find out more about this remarkable high school student and the social media app where she's making her mark, we asked her some questions:

Q Is there a "recipe" for a good TikTok video?

A It's all about connecting with an audience who has similar interests as you. TikTok has such a variety of creators, so finding your own niche is an important first step. However, just being yourself and having fun ultimately comes across genuinely and can be appreciated by all viewers.

Q How do you film them?

A It's very simple. I just use my phone and a tripod. I usually record them in front of my garage door. If someone drives by, they might see me. I do get lots of honks and waves.

Q What was the first TikTok you ever made?

A I've been posting videos since 2015, when the app was known as musical.ly, but my first TikToks were just recreating trends/doing dances/making volleyball content and posting for my friends to see. The first public TikTok currently up on my page is a duet with (former volleyball player and mental health and body-image advocate) Victoria Garrick, showing how even though we're stuck in the house during quarantine, as long as we have a volleyball, we aren't bored.

Q How long did it take you to film and then edit your cold-weather TikTok?

A There isn't any editing involved, but the filming process took around 10 minutes. I needed to step away for a few minutes between clips for the noodles and egg to freeze.

Q Do you ever talk in your videos?

A The majority of my videos are dances, which don't involve talking. However, I've started to add voice-overs when I showcase clothing sent to me from brands I work with. These are called "unboxing" videos.

I also talk in videos to bring awareness to things I find important or positive. Most recently, I was able to share how to send virtual valentines to the kids at St. Jude Children's Research Hospital.

Q What do you mean by "work with" brands? Do they send you merch, do they advertise on your page or what?

A TikTok has become a way to advertise. Companies reach out to collab with me. It can be in exchange for payment or merchandise. I've worked with big brands as well as small businesses to help showcase their products. I choose to work with companies that have a product I would use myself. I am also able to offer my followers a discount code if they want to order any of the items I show.

Q Do you work alone or have a partner in TikTok?

A I do it all alone, from choosing a dance to filming to posting and responding. But I have formed friendships with other dance creators. We pull inspiration from each other and cover some of the same trends. I do original dances other creators have choreographed - it's a partnership in that way.

Q What do your parents and sister think of your fame? 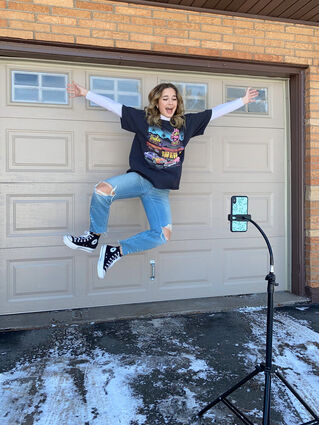 Emerson Rock said she started a TikTok account a few years ago and ramped up her activity during the pandemic. "I consistently posted videos of myself dancing in my driveway in front of my garage door. It was a way to get outside and burn off some energy since club volleyball was canceled and distance learning was in place," Rock said.

A When I asked my mom this question, she said she thinks it's great that I've found an outlet that lets me be creative, and she's proud of the way I've been able to turn it into something positive for myself and others. My sister is supportive and will help me out when I need it.

Q How was distance learning for you this year?

A It hasn't been a challenge for me. I actually enjoy it because it's easy for me to work independently.

Q What do you want to do after you graduate?

A I know I'd like to go into the STEM field. My favorite subject is math. I'm leaning toward statistician, but I have a few other interests as well.

I'd also like to continue volleyball after high school, whether I get the opportunity to play in college or help coach a team.