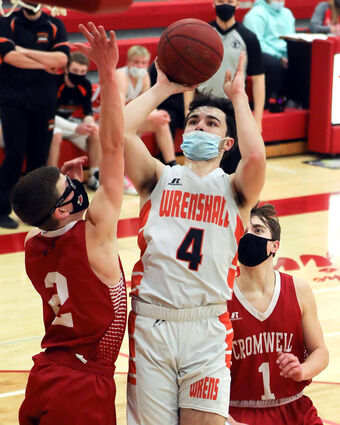 Wrenshall's Zeke Rousseau spits the defense on his way to the basket Tuesday in a loss to Cromwell-Wright.

"We played pretty well tonight," said Cardinals coach Bill Pocernich after the game. "We had struggled with shooting beyond the arc for a few games, but last night and tonight we shot it well."

The Cards hit 13 of the long-range bombs in the win over Wrenshall Tuesday. On Monday they hit 12 from beyond the arc in a 59-40 win over McGregor in another home game.

Leading the way for Cromwell-Wright were guards Ethan Shelton and Noah Foster, who recorded 18 and 17 points respectively, with many of those coming from the 3-point line.

While Shelton and Foster were leading the Cardinals, Mason Perry gave the Wrens an offensive boost with a game-high 19 points.

"We pretty much had to rely on Mason early in the game because we struggled to hit a shot and nothing would fall," said Wrens coach Jon Bartczak. "They were physical and got a lot of offensive rebounds and that resulted in second and third shots."

The Wrens started the game in a zone, hoping that some mid-season shooting woes would continue for the Cards. It didn't. Cromwell-Wright hit 12 long-range shots Monday and the hot hand continued Tuesday, and that was a recipe for disaster for Wrenshall.

"Perry was a tough matchup for us," said Pocernich. "He's good enough to shoot the three and he can put the ball on the floor and create a shot and we struggled guarding him early in the game."

Tate Blomquist also had a good night for the Cardinals with 14 points. 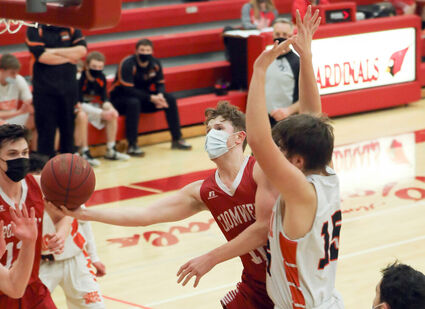 Ethan Shelton scores past the defense of Wrenshall's Corey Despot during Tuesday night's game in Cromwell.

"We came out very flat against them," said Bartczak. "Defensively we just couldn't do much and that allowed them to be physical and out-rebound us on the boards."

The Cards record is now a perfect 6-0 in conference play and 8-6 overall, while the Wrens fell to 5-8 overall.

The Wrens play at Carlton Friday, March 5, for the Brown Jug, then again on Monday, March 8, in Wrenshall. Cromwell-Wright plays at home against Silver Bay Friday, March 5.