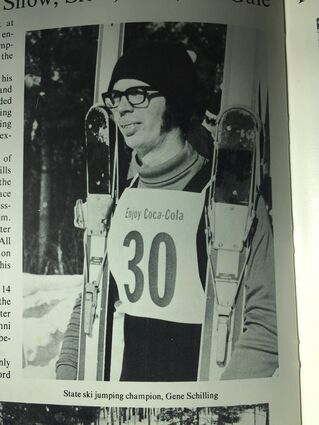 It is quite remarkable to have two state high school champions from the same Cloquet household, but especially rare in the world of ski jumping, in particular because it's no longer a sanctioned high school sport here. Tim and Gene Schilling both won ski jumping titles - Tim in 1965 and Gene in 1972.

There were state jumping competitions from 1932 to 1978. For nearly three decades, the field of champions was dominated by athletes from Coleraine on the Iron Range and Duluth. That changed in 1958 when Dale Finholm broke through for Cloquet with its first jumping champion, leading the way for six more champions from Cloquet. Tim Schilling won in 1965, followed by two consecutive titles for Rick Nelson in 1966 and 1967. Scot Smith won a title in 1970 and Gene Schilling won in 1972. Scott Sobczak won in 1975 and Lance Giblin won the final high school league championship in 1978. Those individual championships coincided with team jumping titles as well.

The Schillings grew up on West Carlton Avenue near the old Leach School. Tim said he was 8 or 10 years old when he first built a ski jump in his backyard. He and classmate Rick Nelson were always experimenting with bigger and bigger slopes, he said. Gene was a little too young to ski, but he'd watch intently and learn.

There was a natural hill behind the No. 2 green at the Cloquet Country Club that twisted toward Hawthorne Avenue. The boys constructed a jump there that occasionally had a "ring of fire" to leap through. "We were crazy kids," Tim said. "It was rags around a fence wire, soaked with a little gas, and then lit. Nobody got hurt, thankfully."

Gene and Tim competed in national U.S. Ski Association events across the country as they grew up, often placing and winning trophies and medals.

Tim said success for Cloquet skiers was a direct result of the creation of Pine Valley, a dream come true through the efforts of longtime Cloquet ski coach Joe Nowak. Opening with a crude setup in 1961, the ski jump at Pine Valley eventually provided a great training facility that would bring school ski teams to dominance in the years to come.

"Ski coach Joe Nowak was such a visionary to get the land and materials donated," Tim said. "Cross country and downhill trails were cut and a jump erected; he was an astounding man."

Nowak was an Olympic-level jumper who grew up near the jump at Chester Park in Duluth. He came to Cloquet to teach and coach in 1958, eventually leading Cloquet to 12 ski titles.

Nowak was the first to go off the new Pine Valley 40-meter jump in 1963. Tim Schilling was the second.

Rick Nelson recalls Nowak inviting Gene Kotlarek from Duluth to speak to the team. He was the 1959 state champion for Duluth Central and a 1964 Olympic ski jumper. Rick remembered Kotlarek urging jumpers to "get as much air time as possible." This meant a lot of repetitions off the ski jump, a lot of practice.

The team was in awe, Rick said, and he and Tim took Kotlarek's message to heart. They often stayed at Pine Valley jumping until 10 p.m. on Tuesdays and Thursdays when the lights were left on later. They said it was also great conditioning climbing from the bottom of the hill up to the jump, then up the steps to the top of the trestle, all the while carrying large jumping skis.

"We were fortunate to have great, knowledgeable coaches but also involved parents," Tim said. "The family was gone to a ski jumping meet nearly every weekend in the winter - Ely, Eau Claire, the Twin Cities, Michigan - some long trips to compete against the Midwest's best."

Nowak stressed the team concept. Even though Tim and Rick were pitted against each other, they watched, critiqued, and gave feedback to each other and other jumpers. It was the same concept for Gene Schilling and Mike Sobczak in 1972. "He was my best friend" Gene said.

The state high school ski meets had 300 total team points available - 100 for jumping, 100 for cross country (Nordic), and 100 for slalom. Cloquet's strength nearly always was jumping and cross country, but teams held their own in downhill slalom as well. When Tim won the jumping meet in 1965, Rick was runner up. In 1966, when Rick was state champ, Tim was second. Rick repeated in 1967 but Tim was unable to compete after a fall at the Fond du Lac jump in Duluth when he broke bones in his back.

When Cloquet took team titles, they often did it with 290 points, meaning they dominated the at all three skills.

Tim Schilling went to the University of Nevada on a skiing scholarship. The next school year both Tim and Rick transferred to anchor the ski jumping program at the college in Lake Tahoe. The team traveled to Utah, New York, Michigan and other ski jumping destinations across the country.

"I remember when we loaded up my 1963 Chevy convertible for the fall trip from Cloquet to Lake Tahoe," Rick said. "We each had three sets of skis, downhill/cross country/jumping, on the trunk for the journey."

Gene Schilling gave up competitive skiing in 1972 after his high school championship. There was a downturn in the sport of jumping in the 1980s. Many jump hills across Minnesota were closing down.

Nowak once wrote that the high school league dropped ski jumping in 1978 because Cloquet had been so dominant, a result of the quality of the Pine Valley facility, which was built by athletes, coaches, community members and businesses. 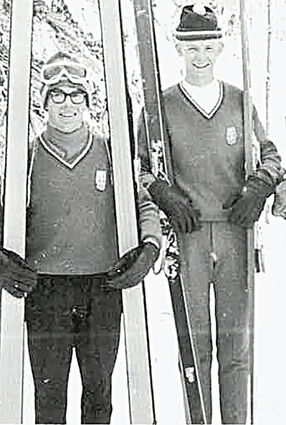 Gene Schilling, his older brother Tim, at left, and Rick Nelson dominated state ski jumping while they were in high school. The Schillings each won an individual title and Nelson won two.

Gene and high school teammates Mike Sobczak and Doug Carter later initiated a program to revitalize the jumps at Pine Valley, which had gone dormant. They all had kids who wanted to try ski flying. Gene and friends are all pleased now when they hear about competitive jumping events at Pine Valley and its continued popularity.

I asked the brothers to describe ski jumping.

Gene said he was a "power" jumper, using his strength attempting to get maximum distance. Tim was always described as "smooth," with grace and form and a balanced landing.

Both methods required perfect timing to thrust and leap at the end of the ramp.

"Going off the big jumps you travel through the air the length of a football field or further," Tim said. "For a while your eyes go blurry until they adjust to the height and flying velocity. Falling is always a possibility but actual injuries are surprisingly limited."

Steve Korby is an award-winning columnist for the Pine Knot News. He can be reached at [email protected]