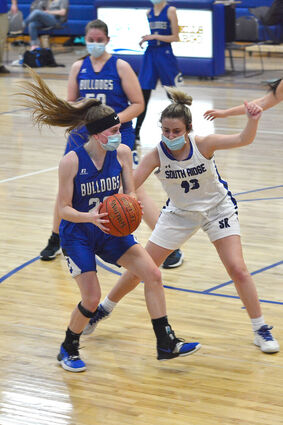 Carlton's Elizabeth Hey works to set up a play as South Ridge's Adella Olesiak keeps the pressure on in Carlton Thursday. The Panthers got their fifth win in a row and their 10th win in 11 games when they bested the Bulldogs 54-31.

Don't look now, but the South Ridge Panthers girls basketball team is serving notice that they are going to be a tough team to beat come playoff time.

The Panthers notched their fifth win in a row and their 10th win over the last 11 games when they defeated the Carlton Bulldogs 54-31 Thursday night.

"It was a hard-fought victory for us and Carlton made us work very hard," said South Ridge coach Brad Olesiak.

The Bulldogs fought hard to stay with the Panthers in the first half and trailed just 26-18 at halftime.

"We were down only eight at halftime and we just ran out of gas in the second half," said Carlton coach Brian Hey. "South Ridge is a tough team, they play aggressive and they attack rebounds well."

Offensive rebounds were a big factor as the Panthers held a decided edge throughout the game and especially in the second half as they outscored the Bulldogs 28-13.

South Ridge was led in scoring by Adella Olesiak and Svea Snickers, who had 21 and 15 points respectively. Despite the 23-point difference, coach Olesiak was impressed with the Bulldogs.

"They never gave up and played very aggressively," said Olesiak of the Bulldogs.

Sam Matarelli led Carlton in scoring with 15 points, followed by Elizabeth Hey with eight points. Also scoring for Carlton were McKenzie Midge with four points and Madison Asleson, Morgan Laveau and Haley Ableiter all with two points each.

Rounding out the scoring for the Panthers were Paris Firkelepp with seven points, Raina Schneider, six, and Physha Preston with three points. Alana Young and Lavern Olson each had one point. 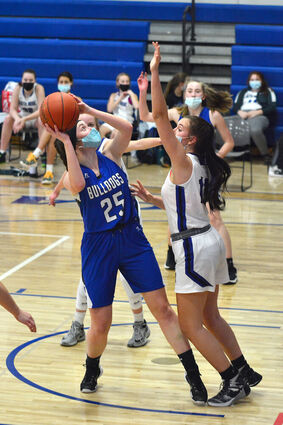 "I am happy that we are getting compliments for something that I thought we were real weak in at the beginning of the season," said Panthers coach Brad Olesiak. "Adella and Svea are our two best shooters and our offense runs through them. They didn't shoot well against Carlton but they still led the way for us. We have been working hard on being aggressive and rebounding and I think it is starting to show."

The Carlton girls play at home next at 6:30 p.m. Thursday, March 11, against Cook County. They play Wrenshall in Carlton at 6 p.m. Friday, March 12. South Ridge plays at home against a tough Cherry team at 7:15 p.m. Saturday, March 6.