Wins come in as season gets rolling 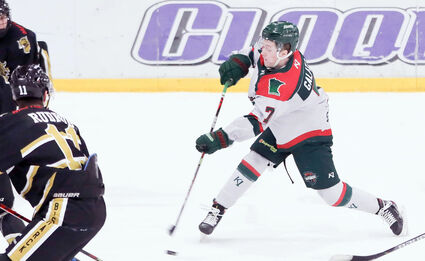 The Wilderness' Christian Galatz shoots for a third-period goal during Thursday's game with the Bismarck Bobcats at Northwoods Credit Union Arena.

Things couldn't be much busier for the Cloquet-based Minnesota Wilderness hockey team as they wrapped up seven games in a 10-day stretch this past week at Northwoods Credit Union Arena with games on Thursday, Saturday and Sunday.

In Thursday's 5-2 loss to the Bismarck Bobcats, things couldn't have gone much worse. After giving up a goal in the first period, the Wilderness allowed three straight goals in the second period. That put the Bobcats ahead 4-0 and forced Wilderness coach Jon Vaillancourt to pull starting goalie Kaleb Johnson.

"Thursday was an upsetting performance for us, I felt our squad didn't come ready to play against a good team," said Vaillancourt. "We made the change in goal to try and get a spark going for our team up front. Kaleb gave us every chance to win that game to the best of his ability."

The second period was especially disturbing to the coaching staff when they gave up the three-goal outburst.

"We didn't play into our structure well and gave up the middle of the ice. Against good teams, you can't give up that amount of odd-man rushes and expect to win," said Vaillancourt. "Combine that with the power play chances we gave them, and it was a challenging period for us. I was happy to see the team respond in the third, but we needed to be better as a squad."

Sam Olson and former CEC hockey star Christian Galatz - a senior this year - both scored in the third period, but those goals came late and well after the damage was done by the Bobcats.

After taking a day off on Friday, the Wilderness bounced back with two wins over Minot, 5-4 and 4-1 Saturday and Sunday.

On Saturday the Wilderness gave up a goal just 5:13 into the first period, but bounced back with two goals of their own to take a 2-1 lead. Former CEC star Gavin Rasmussen scored his sixth goal of the year at 12:14 with assists to Zach Michealis and Jacob Herter to tie the game. At 19:41, former Greenway star Donte Lawson notched his second goal of the season to make it 2-1 with assists to Bobby Metz and Mitch Allard.

"Anytime you have a bad game like we did Thursday and then give up the first goal in the next game is worrisome," Vaillancourt said. "We stuck with our game plan and having Rasmussen score a goal off a great forecheck by Herter and Michaelis was great. The second goal also came off a hard shift with Lawson finding the second chances in front. It was encouraging for us that we had those two goals going into the second period and rebuilt some confidence in our play."

In the second period the Minotauros scored at 4:01 to tie the affair, but again the Wilderness responded with goals from Michaelis at 14:45 and Grant Docter at 15:37 as Minnesota built a 4-2 lead.

Perhaps the most important goal of the game came just 57 seconds into the third period when Mikol Sartor scored for the Wilderness, making it 5-2. Sartor's goal proved to be the game winner as Minot scored twice more to cut the gap to 5-4 and that's how things would end.

Wilderness goalie Jacob Zacharewicz made 22 saves on 26 shots to get the win.

Sunday the Wilderness played their best game of the week when they knocked off Minot 4-1 in a game that was knotted up at 1-1 after the first period.

The Wilderness opened things up with three goals in the second period with the first coming at 6:26 by Josh Phillips, the second at 9:17 by yet another former CEC star Dane Stoyanoff, and then at 15:44 by Ethan Wolthers.

"I thought we played an overall better team game Sunday; Minot is a team we have played many times this season," Vaillancourt said. "We just stuck to our game plan and I was happy to see our players rewarded for their effort. We had production throughout our lineup both nights and this is always encouraging."

Johnson bounced back with a big game in the nets for the Wilderness as he was called on to make 34 saves on 35 shots.

"I think for Kaleb it really showed the level of professionalism he has for the game and his determination to give his team the best chances to win every night," Vaillancourt said. "I am happy with the two wins we had but we still have a lot of growing to do as a team and individuals." 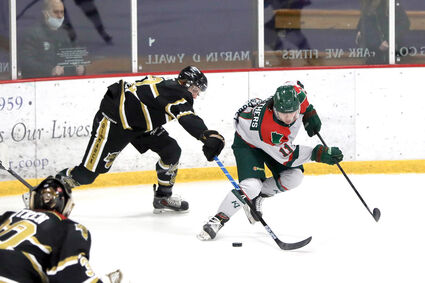 The Wilderness improved to 11-11-1 on the season with the pair of wins on Saturday and Sunday. Perhaps the biggest thing for the Wilderness right now is to stay healthy as they enter yet another 10-day stretch with seven games.

"Our trainers and support staff do a great job with our players to make sure they are as prepared as possible for every game," Vaillancourt said. Sometimes that means working the practice schedule around to give guys ample time to recover or the type of workouts they are doing daily. We stress with our guys to be the best prepared every night."

The Wilderness will play next at home March 12-13 against the Janesville Jets and will hold a "green out" night on March 19 at home.