It's a dog's life for Carlton County mushers 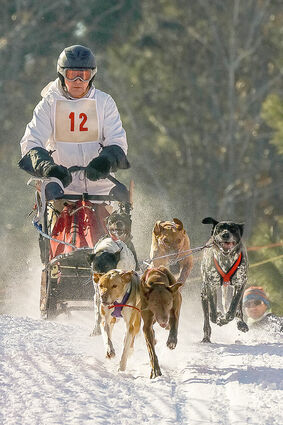 Carlton County sled dog racers Will Bomier and Ted Wallace have spent countless hours over the past several decades tending to, training and racing their dogs. For them, time spent with their dogs is what they love to do.

It turns out that is quite a lot of time, as Bomier and Wallace have over 80 years of mushing experience between them.

“My dad used to take me out, wrap me up and put me in the basket of a sled when I was about two,” Bomier recalled. “I don't remember when I entered my first race but I do remember I had a hard time seeing over the sled handlebars. They probably wouldn't allow that today.”

Bomier once asked his dad if he had been worried sending him out on the trail so young. His father replied confidently that the trail was just kind of a big circle and the dogs would bring him back.

Bomier and Wallace go way back to those early days.

“Ted’s known me since I was just a little tyke running around the parking lot at the races,” said Bomier. “I was kind of raised in the sled dog community, and he's one of those people who I looked up to — a really good person.”

Bomier spoke about the help and guidance Wallace gave him during his early years. “Ted helped me out at races and through life as I was growing up. After going through college, moving away and starting a career, he’s one of the reasons I came back here to Carlton County.”

With all those years of dog sledding experience behind him, Bomier has many stories to tell. But they almost always circle back to the dogs, how smart they are, and how he often learns new ways of problem solving from them.

“I was at a race when I was probably 16 years old. The race went down Main Street and at the end we came around a corner where there were two dog teams tangled up and blocking the entire trail. Before I had time to react and step on the brake and have that ‘Oh geez, what's going to happen’ moment, my lead dog saw the situation.”

“There were hay bales lined up alongside the trail and she managed to navigate the sled around the hay bales, around the tangle of people, dogs and all the commotion, and made the turn back onto the trail. This was in front of everybody at the finish line, and people asked me what command I used to do that. I told them I never said a word — by the time I saw what was happening, we were already going around all that commotion.”

Bomier remembered the dog up front that day as one of the best lead dogs he ever had. Her name was Toby.

“Those are the things you see in the woods when you’re hunting with them, too. The dogs will make decisions like that when you give them the freedom to figure things out. That's where their intelligence really shines,” Bomier said.

On Feb. 19, both Wallace and Bomier were at the Northern Pines Sled Dog Races near Iron River, Wisconsin. Bomier described some of the action. “They have a great trail, with a lot of interesting turns and road intersections. It's the fastest time around about a 5.2-mile track and you're trying to do 19 to 20 miles an hour the whole time. You're really flying because it's short, and really fast.

“Usually, you're passing other dog teams, so you gotta have dogs that can behave themselves and pass without getting tangled up and without saying hello to anybody and make the turns. Then, of course, I’ve got to do my part, which is mostly stay upright and try to anticipate what might be coming up as we go around the trail.”

It turns out not all sled dogs look anything like the Huskies you might imagine them to be.

“We run English Pointers,” Bomier said. “They're hunting dogs when they’re not in the harness. My dogs, being short-coated, we have jackets we put on them when it gets cold. But we don't run much below zero — it's just too cold. They're conditioned to do better when it’s warmer.”

It was Bomier’s wife who first suggested they try out the hunting breed as sled dogs.

“My wife, Melanie, and I met at a sled dog event right here in Carlton County. She said we ought to go look at these English Pointers over in Bayfield.

He describes himself as an “adult-onset hunter.”

“My dad didn't hunt. My grandpa didn't hunt,” Bomier said. “But she and the breeder both said the dogs will teach you everything you need to know about hunting. And you know, so far, they’re right.”

Bird hunting and pulling a sled are very different skills, but Bomier’s dogs love to do both.

“When the harness comes out, they get excited we're gonna go for a sled run,” Bomier said. “We run on the same trails we hunt grouse, but they just put their heads down and run because we're going for a sled run. Then I take the same dogs, take the harness off, grab the hunting vest and the gun, and they go, ‘Oh, now we're going grouse hunting.’ And they run a nice pattern and point birds, so I think it really speaks to their intelligence. And they just love it. I think they get high on running, because they come back in and they're just so much happier. They're proud of themselves with ‘I did such a good job. Didn't I do a good job?’ And I tell them, ‘Yes, you did a good job.’ For me, what's really neat is that connection between the person and the dog.”

Bomier has found training his four dogs — Odin, Thor, Axel and Bo — for both sports on a year-round cycle to be fun and effective.

“We start our training in June, usually when the temperatures are 60 degrees or cooler. We do it that early because it gets them in shape for hunting.”

They run them in harness June, July and August. In September, they go to the prairies out in Montana and South Dakota and run them on sharp-tailed grouse and prairie chickens, then come back and run them on grouse and woodcock until about December, then switch to the sled.

“So, they self-condition themselves by running in the bird woods or on the prairies during hunting season, and then they jump back in the harness.”

Ted Wallace lives near Wrenshall and, at 69 years old, has 45 years of sled dog racing under his belt.

Wallace was introduced to sled dog racing when he got his first high school teaching job and lived in an apartment in Cloquet.

“I went to a race in the middle of the winter in Bemidji. My fiancee — now my wife — Shirley and I had never been to a dog race and we thought, ‘Boy, that’s interesting.’ I went to another one in Pine City and then one up in Ely. That was the one that got me hooked. We got there early in the morning and it was about 10, 15 below. You could hear dogs barking throughout the city, getting ready for the race. That was it for me.”

He remembered his first sled dogs: “I bought my first little leader up on Devils Track in Grand Marais. It went downhill from there, and we bought a small team.”

He started racing the next year, around 1975, he recalled, in Walker, Minnesota.

“I thought I had a pretty good team. It was a five-dog race that was out and back, and I had to head-on pass teams on the way home. I'd never done that, and Al Stead from Duluth — I didn't know him at the time but now we've been friends for many years — was on his way out and I was on my way home,” Wallace recalled.

“We met head-on and Al's team went right over my team, leaping over my lines and sled and kind of tiptoeing through my team. But we made it through without getting tangled, which is a miracle. That was my first run and, holy mackerel, what an eye opener,” Wallace laughed.

Wallace prefers to race more dogs in his teams in slightly longer races than Bomier.

“I mostly concentrate on 10 dogs and 10-to-12-mile races. That’s what I train for and what I've grown up doing,” Walled said. “I started racing before there was a thought of the Beargrease, so I’ve always had my team lope. If you're going to run the Beargrease, they've got to trot.”

Wallace estimated his team’s average speed over 10 miles at between 18.5 and 20 miles an hour. “But if you're going to run a Beargrease team and they average 8 miles an hour, that would be clipping right along. That's a real fast trot, but I like lopers and grew up learning from going fast. I just like to go fast.

“You can only go as fast as your slowest dog, and the bigger teams can carry that speed further. A good four-dog team can go just as fast as an open team for a few miles, but they can't do it for races of 15 to 30 miles where they're averaging 18 or 19 miles an hour,” Wallace said.

Wallace loves to talk about his dogs. His oldest is JoJo, at age seven.

“She is seven, which is getting up there,” Wallace said. “I raised her as a puppy since she was born here. She's a smaller female and I sold her to a friend who was running a smaller team. But I got her back when she was two, and she's been a leader of mine ever since. She's a really good dog, along with Nellie. Those two are my main ones, JoJo and Nellie.”

Right now, he’s training 11 dogs. He’s looking at buying a dog comparable to his that would fit in. 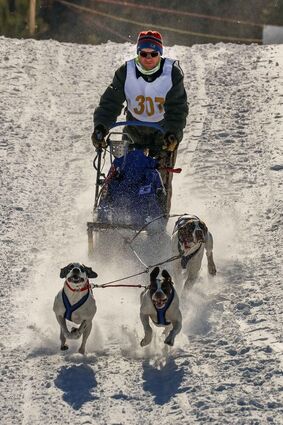 Will Bomier and his team of English Pointers.

Wallace acknowledged that racing sled dogs often means both partners in a marriage rely on each other while still doing what they love best. “My wife, Shirley, used to race a pretty competitive three-dog team,” Wallace said, adding that Shirley still does all the bookwork and takes care of the dogs when he’s gone. She also does ‘agility’ with the two border collies we have in the house.”

Both Wallace and Bomier made it clear that their lives have been enriched by getting to know and work with their many intelligent and energetic dogs over the years.

“I've really enjoyed it. I am not sure what I’d do if I didn't do dogs,” Wallace said.

“Once it gets in your blood, whether you're working hunting dogs or sled dogs or probably any kind of working animal, it's hard to get it out of your system,” Bomier said.