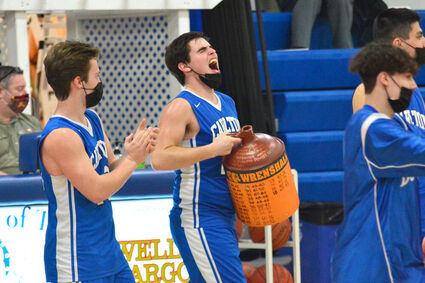 Carlton Bulldogs Aaron Schilla (23) brings the Little Brown Jug to center court as the Bulldogs defeat the Wrenshall Wrens to keep the jug for another year.

As local rivalries go perhaps none is bigger than the Carlton vs. Wrenshall boys basketball game featuring the traveling trophy known as the Brown Jug. This year's version of the game was held Friday, March 5, in Carlton with the host Bulldogs claiming bragging rights this season by taking a 63-45 win over the Wrens.

Entering the game on Friday the two teams were both looking to get their records pointed in a northerly direction. Carlton had lost two of their last three games after suffering losses to Cherry and South Ridge with the win coming against Bigfork. Meanwhile the Wrens had an even tougher streak where they had lost three of four games with their lone victory coming on the road in Grand Marais against Cook County. However, a big difference in this tale of two seasons is the fact that the Bulldogs had only one loss in conference play and were still in the hunt for a conference title.

Despite Covid restrictions the atmosphere was still enthusiastic with plenty of noise, but one can only wonder how crazy the Carlton gym would have been if the game had been played under normal conditions with fans hanging from the rafters.

"It's a community game that means a lot to the players on both teams both past and present," said Wrenshall coach Jon Bartczak. "There were more people than I thought there would be with the amount of fans we have been playing in front of this season."

"The game was a nice addition for this season especially after having some up and down games," said Filipiak.

A huge advantage for the Bulldogs turned out to be team depth, as nine different players scored while the Wrens had seven players put the ball through the hoop.

Trevor Ojibway led the Bulldogs with 16 points and Spencer Rousseau was also in double-digit scoring for Carlton with 11 points. Sam Ojibway added nine, it was Aaron Schilla with seven, Dante Thompson finished with six, both Kristan Herman and Colin Emerson recorded four points and Luke Korpela and Dan Eggert both tossed in three points.

The Wrens had a big night from Mason Perry who tossed in 17 points, but he was the only Wrenshall player in double-digit scoring. AJ Olesen added seven points, it was six for Corey Despot and Austin Larva, Peyton Johnson added five points, while both Ryder Wrazidlo and Carter Woodall finished with two points each.

In an odd twist of fate the two teams also played on Monday night with the Bulldogs notching another win, this time 67-58. But even if it had been a Wrenshall win, the trophy would have stayed in Carlton, as there is only one "brown jug" game per year – hosted by the current holder of the historic jug. That means the jug game will be in Carlton again next year. 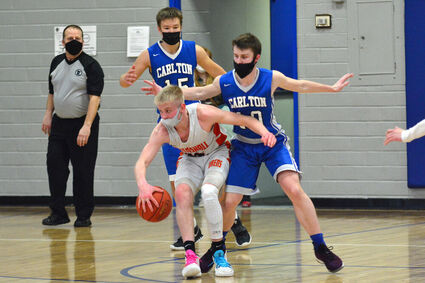 Wrenshall's Austin Larva works the ball to the net as Carlton's Spencer Rousseau (10) and Luukas Korpela (15) defend their net during Friday game in Carlton.

"The game on Monday was another oddity in the schedule for us this year," said Bartczak. "It's the second time this season we've played the same team in back-to-back games."

A check of the schedule shows the Wrens played Floodwood in back-to-back games in February. This was the first time that the Bulldogs ended up facing the same team in a back-to-back situation.

Both teams have seen good times this season, and they have seen difficult times as well. That was the case again on Tuesday night when the Bulldogs lost 55-47 to Eveleth-Gilbert and the Wrens had the tough task of facing the Moose Lake-Willow River Rebels and lost 93-28.

Following Tuesday's games the Bulldogs overall record is now 9-8, but they have a solid 7-1 conference record. After their loss to the Rebels on Tuesday the Wrens fell to 5-12 overall and 4-4 in the conference.