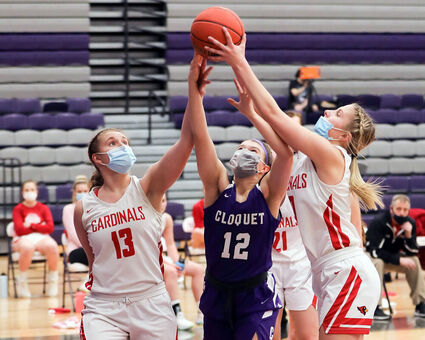 It isn't very often that larger schools play smaller schools in Minnesota high school basketball, but with Covid, things have changed out of necessity. On Thursday night, the Cromwell-Wright girls team parlayed a layup in the last 10 seconds of the game to defeat Cloquet 54-53 in Cloquet.

Cards sophomore Sascha Korpela notched the game-winning basket by driving to the basket for a right-handed with eight seconds remaining, giving the Cardinals the lead.

"She got a double pick to head in for the easy layup," said Cloquet coach Heather Young. "We had some miscommunication that led to that play."

Cloquet immediately took a timeout and made a last-ditch effort to try and win the game, but the shot by 'Jacks freshman Kiley Issendorf didn't fall and Cromwell grabbed the rebound as the Cards stormed away with an impressive road win.

"Sascha had a poor first half for us, but to her credit she turned it around in the second half by scoring 18 points - all of them by driving and scoring or getting fouled and making free throws," said Cards coach Jeff Gronner.

The game was close throughout, with the teams tied at 24 points each at halftime.

Both Korpela and Andrea Pocernich finished with 19 points to lead the Cardinals. Also scoring for Cromwell-Wright were NataLee Hakamaki with eight, Brandi Collman with six, and Siiena Anderson with two points. 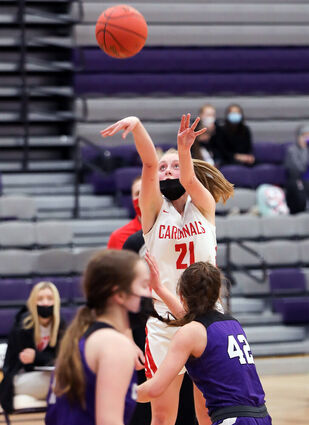 "Andrea played really well on both ends of the floor as she led us in rebounds, and also guard Maddie Young, which is not an easy task because she is a very good player for them," Gronner said. "Andrea scored from everywhere on the floor by doing a little bit of everything from putback rebounds, 3-pointers, driving, just about any way to score."

The win improved the Cards to 10-3 overall, while the loss dropped Cloquet's record to 6-10.