Harry's Gang: Oh, brother and competitor, you are a tough act to follow 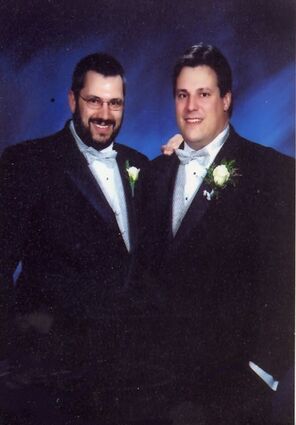 Bill, left, was my older brother and close competitor in childhood.

Brothers can be the most competitive people you'll ever know, while still being your biggest supporters. I've got three brothers, two older and one younger, so I think I know what I'm talking about.

We have a pretty close family, but, man, can we be competitive. I don't think we got that way competing for our parents' affections; we all did pretty good in that department. Maybe it was competing for food at the dinner table? I don't know. But we sure are competitive.

My brother Bill is just a year older, and we've been competing our whole lives. Bill was older, smarter, and stronger than me, which he used to his advantage all the time. We were also inseparable, for most of our lives. When we were kids, we'd go exploring in the woods, keeping our pocketknives open in case a bear attacked. Bill always led, pushing the tree branches aside as we made our way through the underbrush, and had this way of letting the branches snap back behind him, which is just where my chubby little cheeks happened to be. I'd whine and complain, but by the time we got home, my face would be covered with scratches every time. He was amused.

Being just a year apart, we shared many of our clothes, even our underwear. My mother would buy a big package, and write our initials on the label with a magic marker: a B for Bill, a P for Pete. It didn't take long for Bill's drawer to be full of underwear, while I ran out. I complained to my mother, who realized Bill had found the magic marker and put a little loop on all the P's, changing them into B's. Mom started using a backward B after that.

He invented the "You cut, I choose" rule - if we got a treat, one of us would cut it in half, but the other got first pick. You'd be amazed at the precision of a young man when he's afraid his brother may get a bigger piece of cake than he did. We had a lot of strange, brotherly rules like that.

We even competed over girls. He was crazy about a friend of ours in high school, Martha, who thought he was wonderful. The three of us did all sorts of things together, but she didn't seem romantically interested in him. I liked her just as a friend, but couldn't resist pushing the envelope a little, especially to get a dig at Bill. Eventually, she tired of the gameplaying and started dating our buddy Rolf. Neither one of us got the girl. At least we all stayed friends.

About then, we both got weekend jobs - Bill at the local pizza place, and I was the overnight DJ at WAKX in Duluth. He stayed up all night long, every weekend, listening to his little brother make a fool of himself on the radio (he was probably doing some other things too), and frequently waited for me to get home at 7a.m. before he went to bed. I found out later he wanted to make sure I hadn't fallen asleep on the way home.

In college, he bragged about his little brother to all his friends, who couldn't wait to meet me. When I finally came to visit, they didn't understand what all the fuss was about. I was dull, boring, and had no money. Bill was still proud of me, though, and I eventually began to share his adult friends. But it was universally understood that I was the lucky one to have a brother like Bill.

I can tell you precisely when the competition changed. Years ago, we took a road trip in my little VW bug to visit our oldest brother, Tom, in Texas. It was a great trip, until we got a flat tire on a lonely country road in Oklahoma. We had no spare, of course, so one of us got the plum assignment of staying with the car, while the other had to hitch into town and hope to get the tire fixed. So, we flipped a coin. Bill won, but then volunteered, "I'll go." Our relationship really changed that day - we started competing against the world rather than against each other. We had matured.

We lost Bill last week, and I'll miss him. The competition is over, but his influence on me can't be measured. He was a greater person than I could ever be. Even if I keep trying until I'm 100 years old, he'll still win.