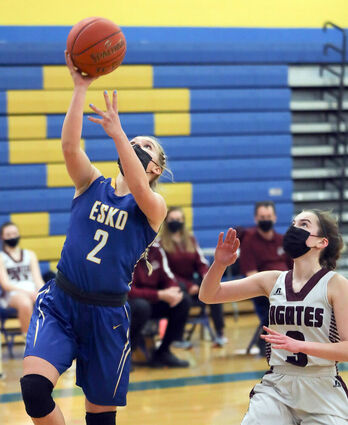 If there was any doubt that the Esko girls basketball team shouldn't be the No. 1 seed in the upcoming Section 7AA playoffs, that doubt was dispelled Friday night when the Eskomos routed the Duluth East Greyhounds 46-31 at home Friday night and then were rewarded with the top seed over the weekend.

Against East, Jayden Karppinen scored 24 points, Brenna Stark added 12 and Aila Gabel finished with 10 points for Esko. They were the only three Eskomos players to score.

"Jayden Karppinen had a big night for us against East," said Esko coach Scott Antonutti. "She not only scored 24 points, but she also had 11 rebounds. Jayden also did a very nice job defending, who we thought their best perimeter threat was, to zero points."

Karppinen was a do-everything-type player who also added 11 rebounds, and Brenna Stark also had a solid game with seven rebounds.

Defensively, Mallory Sunnarborg does a solid job of defending, but she found herself in foul trouble, which meant coach Antonutti had to have other players step up against the Greyhounds.

"Rachel Antonutti played a lot defending the girl Mallory was going to be defending," Antonutti said. "Rachel did a very nice job and of course Karppinen had a great night at the defensive end of the floor also."

Coincidentally, the Greyhounds also had only three players score. East was led by Ashlynne Guenthier with 16 points and Sydney Zwak added 12 points to also score in double-digits. Rylee Stevens contributed three points for the Greyhounds.

Esko led 25-11 at halftime and cruised to their 13th win of the season. 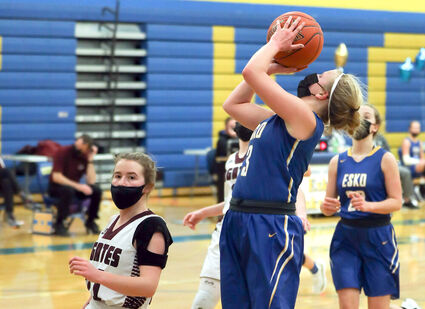 The Eskomos reeled off eight straight wins to start the season and then dropped an overtime game to Pequot Lakes, then won over Hermantown and Hibbing before losing back-to-back games to Crosby-Ironton and Virginia. Esko then finished strong by beating Proctor, Cloquet and Duluth East.

"We started off strong this season and then lost three close games with Sarah Wagemaker out with injury," said Esko coach Scott Antonutti. "Unfortunately, all those games were to section opponents."