State Nordic Skiing: 'It's been quite a ride' 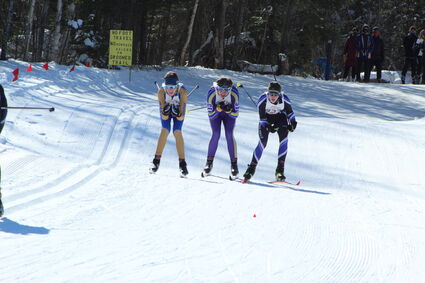 After three decades of coaching Nordic skiing in northern Minnesota, it's not surprising that individual state ski meets kind of blur together for Cloquet-Esko-Carlton coach Ben Croft.

"This one I'll remember. It'll stand out," Croft said, referring to both the pandemic and the warm weather in the days leading up to the meet, which threatened to force a partial move to the alpine slopes as the snow melted rapidly. "Then 10 inches of snow falls the night before the girls race on Thursday," he added, smiling.

The Lumberjacks took a large contingent of skiers to last week's state meets, including Halle Zuck - the only girl - and the entire boys varsity team. It was the second year in a row for the boys team to qualify, and the first trip for Zuck, who was the first girl to go to state since 2017 when Anja Maijala and Erika Fox qualified for CEC. Zuck placed 66th overall and the boys finished in 13th place as a team.

"It's been quite a ride this year," said head coach Arne Maijala. "But they did the best they could with the conditions they had. They raced their hearts out."

Even with the bonus snow from Mother Nature, the state races were challenging. The course had been shortened to 4K because of the lack of snow earlier in the week, and skiers had to do the same course twice instead of separate courses for classic and skate skiing. Rather than ending with the more exciting pursuit race (in which skiers start in order of their time from the first race so the finish reflects the actual order) both races were timed.

The shortened course and the removal of one of the most challenging features of the race - the uphill climb known as the "triple threat" - didn't play to the Lumberjacks' strengths, according to head coach Arne Maijala and Croft. It was more suited for sprinters.

"We tend to have more distance guys," Maijala said, adding that the usual 5K routes feature lots of hills. "And the conditions were so fast."

Still, after beating a tough Ely team by one point to get there, racing at state was the icing on the cake for this year's CEC Nordic ski team.

Zuck said her favorite thing about her state experience was being surrounded by five coaches at one point, including Maijala, Croft, assistant coach Tim Stark, former coach Glen Sorenson and her dad, Bryan.

The state meet was bittersweet for senior Josh Sanders.

"It felt surreal crossing the finish line of a high school race for the last time at state," he said. "Even while it was a much different season from those of the past, I am grateful for everyone on the team who made practices something I looked forward to every day."

CEC will graduate a large group of seniors this year, including four out of the seven boys skiers at state, along with Bong and Hille.

Bong said being an alternate was a great way to end his high school career. He and Hille spent most of Friday at the top of one of the hills, cheering and waving signs picturing each skier's face blown up larger than life.

"It was actually really nice because we didn't have to worry about the stress of racing, but we got to experience state and cheer on the rest of the team. We got to make all the memories but not be all stressed out," Bong said.

Their high school season may have ended, but that didn't stop CEC's top skier Benjamin Bauer from completing an epic ski Monday. Bauer was late to turn in his uniform that day because he'd gone to the Grand Avenue Nordic trail at Spirit Mountain that morning and skied 64.2 miles. For those who prefer kilometers, that's 100K.

"I just wanted to do something really long to push myself just for fun," Bauer said, to the amazement of his teammates.

It's not that surprising. The Cloquet senior did a similar postseason ski with teammate Cale Prosen last year, and Bauer is usually the first to hit the trails when the first snow falls in autumn.

Skiing takes dedication and fitness. Most (although not all) of the varsity skiers are cross country runners in the fall, and run track in the spring, which keeps them in good shape for skiing. Slater plays soccer in the fall, Zuck is a swimmer. Others - Bauer, Sanders, Prosen, Maijala - have been training year-round with Croft for a while now; they even started a rowing team last summer.

It seems obvious that the extra training (and junior nationals qualifying races) paid off - with two consecutive trips to state, after a dry spell of about three decades where the Lumberjacks sent individual skiers to state but not a full team.

Prosen said it's been worth it, and he enjoyed spending more time with his teammates. He hopes to continue that tradition of success, with sophomores Miles Fischer and Jordan Chopskie, and William Bauer, Benjamin's younger brother who skied varsity several times this year as an eighth-grader.

Croft said he's willing to "steer" more kids in the right direction if they want to put a little more effort into it.

But it's not just about winning. Although skiing is largely an individual sport, a person would be hard pressed to find a more supportive team atmosphere.

"Everybody is there to help everybody else," Jordan Chopskie said. 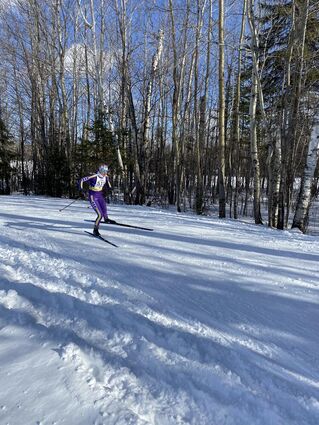 Halle Zuck was the sole participant for the CEC girls, finishing 66th.

AJ Maijala said he enjoys skiing because it was the first sport where he could interact with other athletes from Esko and Carlton because it's a combined team.

"I've made some lifelong friends here," he said. "And once again, I always thank Ben Croft for pushing us in the summer, the canoe races are super fun."

Most of the seniors said they plan to keep skiing, maybe on college teams or club teams, or simply as "citizen skiers," as Bauer put it.

"There was this picture going around Facebook of Glen (Sorenson) and his brothers. They skied the Birkie out in West Yellowstone," Bauer said of the retired teacher and coach. "That was pretty cool to see. It's definitely something I plan on doing for the rest of my life."