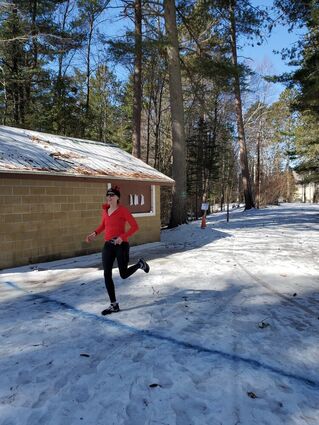 Beth Freymiller crosses the finish line of the 5K race. She also raced in the 15K fat tire bike race earlier that morning.

This year's annual Frozen Forester races at Pine Valley raised more than $2,000 to help with trail expansion and maintenance costs for the new bike trails at Cloquet's popular woodland park.

Held on March 13, the unique race offered participants a choice between a 5.5K run/walk/snowshoe - as a family-friendly trails option - or a much more challenging off-trail run. They could also do a 15K fat tire bike ride on groomed trails, or go for both a bike and a run of their choice.

Race turnout has grown from the initial turnout of two people three years ago, with more than 50 participants registering for this year's races.

Eighteen people signed up for the adventure run. The top finisher was Barry Fischer in 1:26:57, followed by David Sunnarborg in 1:29;02 and Sue Ulsby in 1:31:51, the top woman finisher. 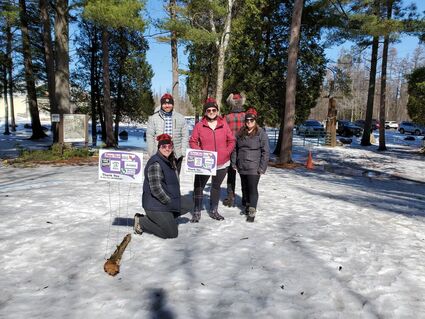 Twenty-three people raced in the 15K bike race, making three rounds of the new bike trails through the park. Tom Miller took first place in 55:54, followed by Travis Jones in 59:39 and Beth Freymiller in 1:02:19.

Freymiller also won the family-friendly 5K race (run on the trails), finishing in 30:44. She was followed by Elizabeth Deluca in 37:55 and Sandra Benney in 40 minutes even.

"We had the luckiest weather that we could have ever had: crisp enough to solidify the snow but warm enough so people were comfortable," Krohn said. "If we had planned it even one day later, it would have been a mess with much warmer temperatures. We could not have asked for a more perfect March day."

Sad to have missed it? Look for information on the Lost Forester races coming on Labor Day.