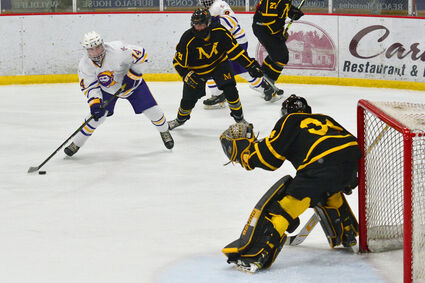 The Lumberjacks' Brayden Tyman fires off a shot at the Marshall net Thursday as the Lumberjacks shut out Marshall 2-0 in Cloquet.

After opening the Section 7AA hockey tournament with a 2-0 home win over Duluth Marshall, the Cloquet-Esko-Carlton boys team was bounced from the tournament Saturday afternoon by a 4-0 score at the hands of Grand Rapids.

The Lumberjacks struggled to start the game and were outshot 13-3 in the opening period, but somehow they kept the game scoreless at that point.

"We had a good game plan of getting out into the neutral zone to create some offense," said CEC coach Shea Walters. "They contained us well. Most of their shots in the first period were from the outside and were able to be seen by our goalie Zach Tyman."

"We had several opportunities on power plays to generate momentum, but we just struggled to produce anything," Walters said. "Rapids was able to capitalize on some in-zone play. Again, many shots were from the perimeter. They were able to sneak in guys backdoor and able to find them. Our breakdowns in the defensive zone led to the three goals." 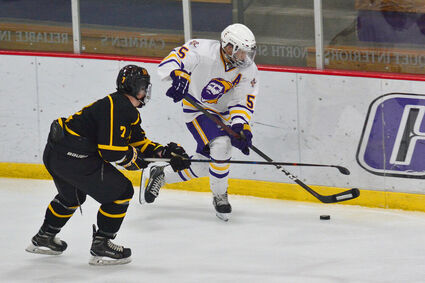 CEC's Logan Dushkin keeps the puck out of reach of Marshall's Darik Olson as the Lumberjacks defeat the Hilltoppers 2-0 Thursday evening in Cloquet. The win sent the Lumberjacks to a matchup with top section seed Grand Rapids. The Thunderhawks ended the Lumberjacks season.

The final goal of the game was scored by Peart on an empty net, with Tyman on the bench for an extra attacker.

"Give credit where credit is due. Top to bottom, those Rapids players can skate and play," said Walters. "They moved the puck well, controlled the pace of play, and capitalized on their opportunities. They have a good team, but our failure to execute helped them establish their game."

The Lumberjacks finished the season with an 11-8-1 record and will lose eight seniors to graduation.

"We will lose a fantastic group of seniors this year," Walters said. "They were a great group that I am proud of, and made it very enjoyable to come to the rink every day."