By Kerry Rodd and Jana Peterson 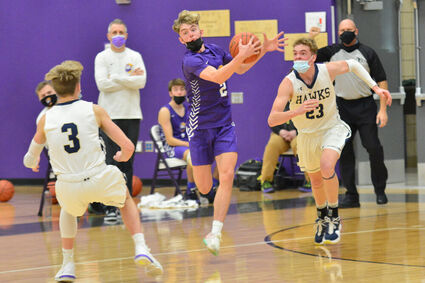 Cloquet's Adam Schneider gains control of the ball as the Lumberjacks take on the Hermantown Hawks Saturday in Cloquet.

In an odd twist of fate, the Cloquet boys basketball team played Hermantown in their final regular season game on Wednesday and then had to turn around and face the Hawks again on Saturday in the Section 7AAA quarterfinals.

In both cases, the Lumberjacks came away with a win.

After taking a 24-point win on Wednesday in the regular season, the Lumberjacks cruised to another win over the Hawks on Saturday - this time by a 79-59 score.

A big key to the win was Cloquet causing the Hawks to turn the ball over 33 times while turning it over only 15 times themselves. In all, the 'Jacks had a 29-9 advantage in scoring off of turnovers.

"I wasn't really surprised, but I wouldn't have been surprised by a close game either," said head coach Steve Battaglia. "They've got young talent that is dangerous, but we've got an old team that has been playing well."

Adam Schneider and Conner Barney led the Jacks with 20 and 19 points, respectively. Dylan Heehn also had a big night with 15 points for Cloquet. Alec Turnbull added nine points, while Caleb Hanson and Jack Sorenson scored five each. Tyler Issendorf recorded four points and Jordan Diver had a pair of points.

The first round win sent Cloquet to a semifinal game against a tough Hibbing team Tuesday evening in Hibbing.

Although the Lumberjacks lost 69-50, Battaglia said it was a good game, and Cloquet had a much better showing than in the regular season game they lost by 52 points.

"We played smart both

defensively and offensively – executed our game plan very well," Battaglia said. "It's just hard to put together a scheme to control all of their weapons. We did what we could do, but we needed them to help us out too. Ayden McDonald was the difference for them."

The Bluejackets led by just four points, 33-29, at halftime, but then exploded early in the second half to pull away and secure the victory and a spot in the Section 7AAA championship game. McDonald scored 27 points for the Bluejackets, who were set to face No. 1 seed Princeton Thursday in the finals after this issue of the Pine Knot News was printed.

Cloquet was led in scoring by Adam Schneider and Conner Barney, who each finished with 15 points. Dylan Heehn scored 7 points, Caleb Hansen 6 and Alec Turnbull 5 while Nate Blatchford scored 2.

While Schneider has been a leading scorer for the Lumberjacks for close to three years now, Barney was new to the team this year. The 11th grader attends CHS but had previously played for the Fond du Lac Ojibwe team, which did not play this year due to Covid restrictions.

Battaglia said Barney had to play JV until the MSHSL appeals process played out. 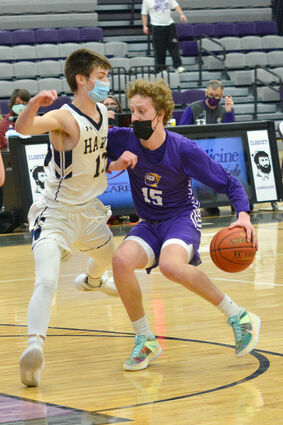 Cloquet's Alec Turnbull tries to break coverage from Hermantown's Keaton Christianson on a drive to the basket Saturday as the Lumberjacks defeated the Hawks.

"They made the correct decision to allow him to play in Cloquet since he had no other choice," Battaglia said, adding that Barney told him he's playing in Cloquet again next year. "He's a heck of a player – scores, can rebound, physical defender – he'll be one of the best players in the section next year."

After starting the season facing a lot of tough teams, the Lumberjacks finished by winning nine out of their last 12 games.

"We ended up winning the Lake Superior Conference, which is no small task when you consider Superior, Hermantown, and Grand Rapids all are powerhouse programs in our conference," Battaglia said.

Cloquet finished the season at 13-7.

The Lumberjacks will graduate a number of seniors this year, including Adam Schneider, Dylan Heehn, Nate Blatchford, Tyler Issendorf and Jordan Diver. Battaglia said they will be missed.

"They are great kids who love basketball," he said. "They accomplished a lot."