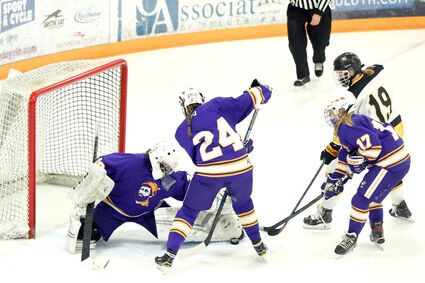 Cloquet-Esko-Carlton goaltender Araya Kiminski kicks away a puck before Marshall's Ilsa Lindaman can get to the rebound, with help from teammates Emily Litchke (17) and Frankie Halverson. The Hilltoppers prevailed 4-0.

Both the Cloquet-Esko-Carlton and Moose Lake Area girls hockey teams bowed out of the Section 7A hockey tournament Thursday night.

The Lumberjacks were chopp-ed down by the Hilltoppers and the Rebels were beaten 10-1 by No. 1 seed Proctor/Hermantown.

Against Duluth Marshall, the Lumberjacks were dead-even and scoreless through the first 10 minutes of the first period, but a goal at 10:13 by Emelia McGiffert would be the only goal of the period and it gave the Hilltoppers a 1-0 lead.

"After their third goal we took a timeout to try and regroup and to try and gather our composure," said CEC coach Courtney Olin. "I was proud of how we bounced back and continued to battle the rest of the game, even when we were losing on the scoreboard."

The final goal of the game came with just 18 seconds remaining when Maren Friday shot the puck into an empty net, making the final 4-0.

"Marshall is very quick and Maren Friday is an outstanding defenseman with poise and that was evident in our game," Olin said.

CEC ends the season with a 9-8 record.

"It was the most challenging season I've had as a coach between injuries, illness and all of the Covid setbacks," Olin said. "Through all the adversity, our team continued to work hard and have a great attitude."

Rebels run out of steam

Thursday night was also not kind to the Moose Lake Area Rebels, who dropped a 10-1 decision to a very good Proctor/Hermantown squad that is undefeated and now 18-0 on the season.

"We knew going into the game that it was going to be a battle," said Rebels coach Reilly Fawcett. "I thought we played a great first period. We kept them outside, won battles and were strong in front of our net." 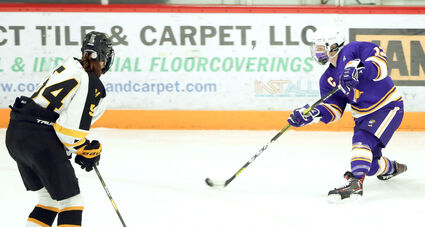 After Macy Sieger scored at 6:27 to give the Mirage a 1-0 lead, the Rebels responded with a goal of their own from Julia Jusczak at 14:58 with the assist going to Mackenzie Hoffman. That seemed to breathe life into the Rebels who were outshot 26-10 in the period. That would all end in the second period when the Mirage scored eight straight goals.

"We expended a lot of energy in that first period and we just came out flat in the second period," said Fawcett. "The Mirage took advantage of their opportunities and executed on them. I tried to keep our team motivated, but it's never easy coming back from one goal after another."

The Mirage outshot the Rebels 20-3 in the second period and then scored the only goal of the third period for the final of 10-1.

The Rebels finish the season with a record of 8-11 and will lose two seniors, as both Jada Jerry and Caitlyn Koecher will graduate this spring.