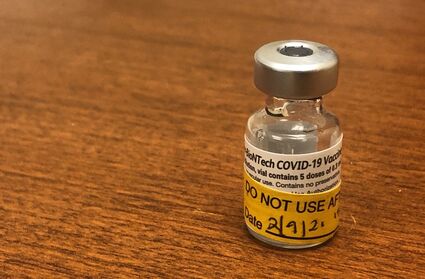 In a major milestone for the state’s Covid-19 vaccination strategy, all Minnesotans 16 and older are now officially eligible to be vaccinated — regardless of age, location, occupation, health conditions or living situation.

But state health officials are cautioning that the expansion won’t mean that vaccine doses will be immediately available to everyone who’s eligible.

The Health Department on Wednesday reported about 48,000 new vaccinations, pushing the seven-day trend to nearly 51,000 shots daily — the highest since vaccinations began in late December.

More than 1 million Minnesotans are fully inoculated while more than 1.6 million have received at least one dose, including about 81 percent of residents age 65 and older.

Officials remain anxious about rising caseloads tied to the U.K. Covid-19 variant and to youth sports. They’ve confirmed more than 500 cases of the U.K. strain in recent weeks and believe that as many as half the state’s new cases may be tied to that variant.

Wednesday’s data also shows the state’s positive test rate trending for a second day above 5 percent — a warning sign about a possible surge.

The good news is that many of the state’s highest-risk residents, including seniors, have received at least one dose already and Minnesota expects to see its federal vaccine supply shipments jump starting in April.

Officials have described the current situation, though, as a race against time to vaccinate before the Covid-19 variants can get a stronger foothold in the state.

The process of actually securing a vaccine appointment can be confusing — and state health leaders say that there’s sure to be far more demand this week than available shots. Here are three things you need to know, if you’re newly on the hunt for a vaccine.

There are many avenues that lead to an appointment.

State health leaders have been urging Minnesotans to sign up for alerts through the state’s Vaccine Connector tool, an online and over-the-phone system that’s being used to alert people to available appointments at community clinics nearby.

But health leaders are urging people to not stop there — and to not wait until they’re contacted to seek out the vaccine. They say people should take an opportunity to be vaccinated if it arises: whether through a clinic or call from their doctor.

There are many, many avenues in Minnesota for getting an appointment — through nonprofits, pharmacy chains, tribal health departments, Veterans Affairs clinics and more.

(See the local list in story at the top of this page.)

Some providers will continue to prioritize certain groups.

The providers administering the vaccine — from large health care systems to doctors’ offices to local pharmacies, public and tribal health departments and beyond — have differing priorities for who they’re trying to reach.

Health care providers, for instance, might continue to prioritize vaccinating older patients or those with specific health conditions, over younger, healthier patients.

And many local public health departments and hospital systems say they’re planning to continue hosting vaccination clinics and other efforts that focus on getting vaccine to people who might otherwise have trouble accessing it.

That’s an increase over previous weeks, and the supply is expected to continue to grow. By the second week of April, the state is planning to receive more than 500,000 doses of the vaccines.

But even as the supply ramps up, state health leaders have said they expect demand to far outpace it, for weeks to come.

The Pfizer and Moderna vaccinations require two doses within three to four weeks of each other. The doses are scheduled 21 days apart for the Pfizer vaccine, and 28 days apart for the Moderna vaccine. You must get both of your doses from the same maker. Public health officials are considering strategies to make sure people who get their first shot come back for their second on time.

The Centers for Disease Control and Prevention recommends people get their second dose as close to the prescribed timeline as possible, though they recently updated their guidance to allow up to six weeks between vaccines, but only if it’s not possible to follow the recommended interval.

The vaccine produced by Johnson & Johnson requires one dose.

Health officials estimate that it could take up to a few weeks after vaccination to build immunity.

The state has recorded 519,529 total confirmed or probable cases so far in the pandemic, including 1,660 posted Wednesday. About 96 percent of Minnesotans known to be infected with Covid-19 in the pandemic have recovered to the point where they no longer need to be isolated.

Regionally, all parts of Minnesota are in better shape than they were in late November and early December.

The latest numbers show cases are up sharply in every age group except the oldest, and in almost every region of the state.

Public health leaders continue to keep watch on clusters in the southwest Twin Cities metro area — specifically Carver and Scott counties — as well as the Mankato area and the eastern Iron Range, centered around the town of Aurora. There’s also been a recent outbreak in Ely, northeast of Aurora.

People in their 20s still make up the age bracket with the state’s largest number of confirmed cases — more than 97,000 since the pandemic began, including more than 51,000 among those ages 20 to 24.