Harry's gang: There's freedom of speech and the freedom to ignore it 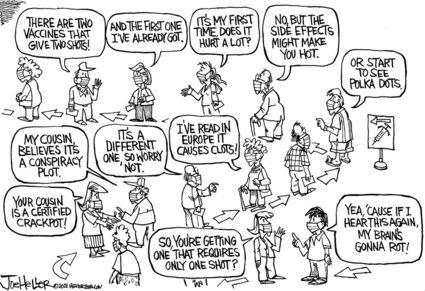 Even I was a little shocked to get my Pine Knot News in the mail last Friday. Maybe we should start mailing them in brown paper wrapping, so little kids can't see the covers, like they used to do with "adult" material.

I'm referring, of course, to the front page picture in last week's issue. Apparently, someone in town feels strongly enough about his perception of the political climate that he feels a flag, emblazoned with vulgar expletives, is an appropriate way to express his frustration.

He's wrong, of course. His flag does little to help anyone reach any conclusions, but in today's political climate, the jerks who make the most noise get the attention rather than those who work cooperatively with others to make actual accomplishments. Fortunately, there are far more of the latter than there are of the former, but those loud ones do seem to get the most press. Even in our little community newspaper.

The decision to publish the photo wasn't a hard one, but it was discussed more in the newsroom than most photographs. I'm not really a part of that process; I leave those decisions to the professional journalists in our office, Jana Peterson and Mike Creger. But I was a part of the discussion about whether we should use the actual vulgarity in the story. If you noticed, the decision was: no. We would not print the actual word in our story, mostly because the phrase was already splashed across the front page picture, and also because we're a nice, local, community newspaper that doesn't feel the need to use such words in print.

I struggled between the freedom of speech issue and respecting our community standards as we discussed it. My neighbor TJ Smith is fond of saying, "Just because you can do something doesn't mean you should do it." He's right. I don't believe those flying such offensive flags in public, so close to the local schools, are truly champions of free speech any more than stripping naked in nudie bars is an artistic expression of free speech. But there's no doubt that both are protected by our First Amendment rights to free speech.

But free speech works both ways. We have every right to run our story, but every citizen has the right to make their displeasure known to the chucklehead who put the flags up in the first place. Did we need to repeat the word in the story to make the story complete? Eventually, after much discussion, we opted to partially spell the word, using an asterisk to avoid the complete spelling of the vulgar word. Were you fooled? Neither was anyone else. But at least the decision was ours. Those parents driving their kids to school don't have that option - that flag is flying right out in public, for all their children to see. I hope he's proud of himself. I bet he is.

No one asked me if he should have posted that flag. And if someone had, I would have suggested there are better ways to express your political beliefs. Some agree with the flag's message. The former president developed a huge block of rabid fans, some of whom were willing to attack the U.S. Capitol in support of him. Others of us felt the same animosity toward the last president, and I've seen bumper stickers with the same vulgar message blasting the former president using the exact same word. I didn't like it then, either.

But if someone asked my opinion, as a professional attorney who has studied the First Amendment, I would have advised that the flag was protected by the First Amendment. Not promoted or encouraged by the First Amendment, but protected by it. That means we have the right, in this country, to express our displeasure using words that many of us don't like to see or hear - even if we use them ourselves in common speech. And there's no doubt the word works. I doubt we would have run a story, much less on the print page, if the flag said, "I Don't Like Biden Very Much."

But the decision to run such a story would be our right - our expression of free speech. The flag in our story is offensive, and the guy who put it there is a boor. But I'll save my outrage for issues more important to me. Want to know what they are? Keep reading this column every week and you'll find out.

Pete Radosevich is the publisher of the Pine Knot News and an attorney in Esko who hosts the cable access talk show "Harry's Gang" on CAT-7. His opinions are his own. Contact him at [email protected]